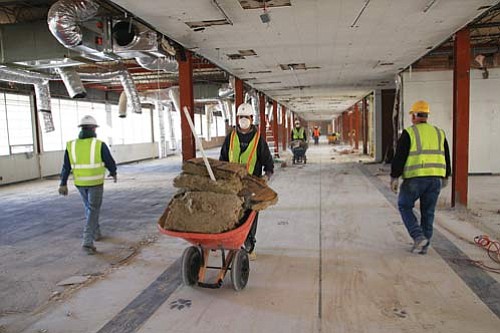 JC AMBERLYN/Miner <br> The exterior of Lee Williams High School will look familiar when it welcomes students, but the inside of what was White Cliffs Middle School will be vastly different. <a href="http://kingmandailyminer.com/Formlayout.asp?formcall=userform&form=20">Click here to purchase this photo</a>

KINGMAN - From the outside, the old White Cliffs Middle School campus at 400 Grandview Ave. still looks much the same as it did last semester. Inside the building, however, the scene couldn't be more different, the air clotted with dust as construction workers clad in hard hats and bright yellow vests rip up floors, tear out fiberglass insulation and carry load after load of debris out in wheelbarrows.

For two weeks now, crews have been laboring to effectively gut the White Cliffs building from the inside out, with the end goal to have nothing left besides the building's brick façade. It's the first phase of a 17-month, $22 million project to transform the old middle school into a new high school for the Kingman Unified School District, Lee Williams High.

According to KUSD Construction Director Oz Enderby, crews will continue to strip literally everything out of "Building A," the main White Cliffs campus, from now through early March. Everything must go - the wiring, the piping, and especially the translucent wall panels, which actually brought in more heat that they were supposed to keep out.

"They'll be replaced with a modern glass system, similar to what you see on modern-day skyscrapers," Enderby said. "It's very highly-efficient, and it'll be comfortable - not like it is with these walls in the summertime. One of the reasons we opted to demo the entire interior of the building was so we could put in all new infrastructure. It made much more sense to get rid of everything instead of trying to deal with the variety of infrastructure that had been put in over the years."

In fact, he said, the new technology being incorporated into the building interior will not only make Lee Williams High the most energy efficient building in the district, but also the most friendly to a modern-day learning environment, with full wireless Internet access throughout the campus.

The cafeteria and quad will both be new additions to the campus, with the existing cafeteria slated for demolition and a new, larger cafeteria set to replace it. The quad will feature an outdoor grassy area along the campus' west side, with paved walkways and trees offering students a place to congregate before classes or during lunch. The quad will also provide an additional 18,000 square feet for future building development.

The White Cliffs gymnasium will go untouched during the demolition process, however, a new auxiliary gymnasium is set to go on the campus's northeast side. The new gym will feature wrestling and weight-lifting areas and will allow LWHS to provide the same interior athletics that are currently available at Kingman High School.

Outside, the existing football field sod will be pulled up and reused at KHS's new athletic field. "As we do this demolition, we're salvaging or repurposing some of the existing outside structures and relocating them to other schools in the district," Enderby noted. Eventually, new sod, as well as a new competition track, will be built to replace the removed field on the LWHS campus. The tennis courts will be relocated to KHS, but in their place two new baseball fields will be constructed at the former site of the Mohave County Hospital, on the campus's south side.

In addition to having a full compliment of athletics, Lee Williams High will also take advantage of KUSD's growing Career and Technical Education program. A building that once served as an old auto shop will be reopened and repurposed to include several classrooms for metalworking and various other arts programs, in addition to its original purpose.

"The intent is to bring that back and refurbish that auto shop and make that program available at Lee Williams High School," Enderby said. "We're aiming to offer new courses at this high school that aren't currently offered at Kingman High School."

Lee Williams High is currently on schedule to be completed in time to open in August of 2011, though an actual opening date has not yet been set by the KUSD board. Once it does open, Enderby said the school will probably take between 800 to 1,000 of KHS's student load, with both schools eventually set to level out at a total 3,000 students.

"When we finish Lee Williams, it will have a capacity of 1,200 students. Kingman High School, as it was originally built, had a capacity of 1,600," Enderby said. "The goal is to get back to two totally comprehensive high schools that each have a student capacity of approximately 1,500 students."

Enderby added that, with the exception of asbestos removal, all of the current demolition work is being done by local contractors. While it remains unknown exactly how many locals will work on the construction side of the project, Enderby said bids are coming in and contracts are set to be issued as soon as Feb. 26, when he will present a guaranteed maximum price to the school board.

"Subsequent to that we'll immediately start to issue contracts," Enderby said. "It'll be a great percentage of local, but we won't know for sure until the first week of March."