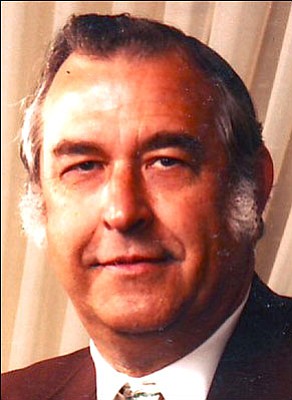 Ray graduated from Greenville College in 1951, attended the University of Illinois College of Dentistry and graduated in 1955. For two years, he served as a 1st lieutenant in the Army at White Sands Missile Range in New Mexico as a dentist. Ray returned to the University of Illinois College of Medicine and obtained his medical degree in 1961. Ray did his residency at Maricopa Medical Center in Phoenix then moved to Kingman in 1964 where he practiced as a physician and surgeon until retirement in 1992.

He is also survived by his brothers, Bernard Hammer of Bethalto, Ill., and Ralph (Ricki) Hammer of Flushing, Mich.; his sister, Annella (Gene) Baumann of Greenville, Ill.; and four nieces and seven nephews.

Ray was active in the Kingman Kiwanis Club for more than 35 years. He loved flying, sailing, oil painting, and was an avid reader.

Visitation will be from 5 to 7 p.m. Friday, Feb. 19, at Sutton Memorial Funeral Home, 1701 Sycamore Ave. Services will be at 10 a.m. Saturday, Feb. 20, at the Cross of Christ Lutheran Church, 4045 N. Van Nuys Road. Following the services, a gather of family and friends will be held at the church.