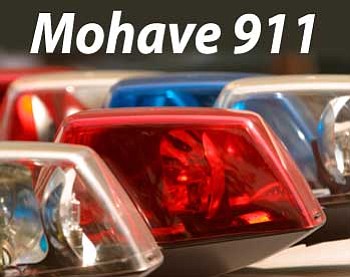 KINGMAN - Mohave County Sheriff's deputies arrested Bryson Rickey Hunter Sr., 32, of Peach Springs Friday on a felony warrant for failure to remain at scene of an injury accident issued by Mohave County Superior Court and on a misdemeanor warrant for failure to appear issued by Kingman Justice Court. Deputies contacted Hunter at a non-injury traffic accident on Diamond Bar. He was a passenger in one of the vehicles involved. A records check showed Hunter to have an outstanding warrant. He was arrested without incident, transported and booked into the Mohave County Jail.

KINGMAN - Mohave County Sheriff's deputies arrested Robert Lopez Figueroa, 31, of Kingman Saturday on a felony warrant for possession of a dangerous drug issued by Mohave County Superior Court. Deputies responded to a possible burglary at a residence in the 3200 block of McVicar Avenue around 8:30 a.m. and contacted Figueroa, who they determined lived at the residence. A records check showed Figueroa to have an outstanding warrant. He was arrested without incident, transported and booked into the Mohave County Jail.

KINGMAN - Kingman Police officers arrested local resident Cristine Ester Mattes, 34, Sunday for possession of drug paraphernalia. Officers responded to a local store in the 3500 block of Stockton Hill Road around 5 p.m. in reference to a possible shoplifting in progress. While officers were present, Mattes went through a checkout stand and the buzzer sounded. Officers contacted Mattes and asked her if she had any property that she didn't pay for. She said that she didn't, and she gave permission to check. An unknown medication was located on Mattes, and also located in her vehicle was miscellaneous drug paraphernalia. Mattes was booked into the Mohave County Jail.

KINGMAN - Kingman Police officers responded to a local department store in the 3300 block of Stockton Hill Road around 6:30 p.m. Sunday in reference to a person trespassing on their property. Officers contacted local resident Kevin Vincent Snead, 44. A records check showed that Snead had 10 misdemeanor warrants for his arrest. A search was conducted and Snead was also found to be in possession of dangerous drugs and drug paraphernalia. He was booked into the Mohave County Jail.

KINGMAN - Mohave County Sheriff's deputies responded to a report at the Mohave County Jail on Sunday regarding an assault on two detention officers by an inmate. Deputies spoke with both victims and they reported that Shawn Avery Guerrero, 26, of Kingman assaulted them earlier that afternoon. The officers said they entered Guerrero's cell and that he would not comply with their verbal commands. One detention officer was allegedly struck in the head by Guerrero and the other detention officer got scratches on his face and neck from him. Detention officers restrained Guerrero with pepper spray. During conversations with Guerrero, he said the officers would not leave his cell and admitted that he slapped one of them. Guerrero was charged with two felony counts of aggravated assault on a detention officer. He is jailed while awaiting trial on first-degree murder charges for allegedly killing his father in September 2008.