KHS's 'Blue and Gold' hot off the press 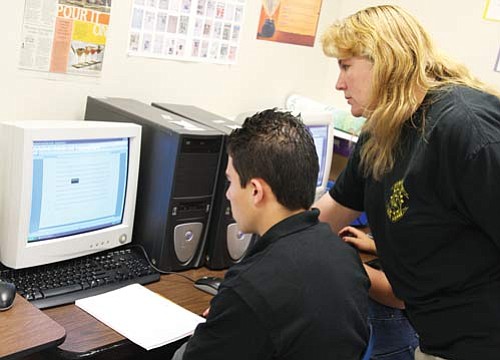 KINGMAN - With dropping ad revenues and increasing competition from the Internet, print journalism has had a rough time over the last few years, with several high-profile closures and innumerable scale- backs across the newspaper industry. But that hasn't dissuaded Sharon Alder's journalism class at Kingman High School. After more than a year of preparation and training, they are about to revive the school's newspaper from a decade-long hiatus.

The newly-christened "Blue and Gold" is set to publish 2,000 copies of its first edition today. With eight pages of features, editorials, opinions and reviews, it is the first incarnation of KHS's newspaper to ever be printed on actual newsprint, thanks to some assistance from the Daily Miner's own Central Printing Facility in Golden Valley. According to Principal Pat Mickelson, the last student newspaper, "The Bulldog Beat," consisted simply of stories printed on sheets of copy paper, which were then stapled together.

The Beat went under shortly after the class of 1999, at which point Mickelson said there simply weren't any staff interested in teaching both the writing aspects of journalism as well as the production aspects of page layout, resizing photos and interviewing skills.

"The important thing is that you have somebody who has great knowledge of how to do it, a great passion for producing it, and the ability to get kids excited, interested and working to stay with it," Mickelson said. "That's one of the reasons it kind of dropped off, because we didn't have those ingredients."

But that all changed when Alder relocated to Kingman last year and offered to reestablish the school's journalism club. Prior to her move, Alder had spent the better part of the last decade as the adviser to a student newspaper in Washington state, in addition to teaching English.

"She gave me a whole list of what she needed in her classroom before she got here," Mickelson said. "I would rather have a product that everyone is incredibly proud of, rather than putting something together on the spur of the moment without a good base. And with Alder, I believe that we're going to have a good product here, and I'm really excited."

Alder's students are just as excited to finally see their work in print, especially since it took so long to finally get to this point. In fact, it took Alder fully three semesters to reach a point where her class had the skills they needed to put enough quality articles into a finished product.

"When we first started, we were lost," said the paper's editor in chief, senior Brittany Broderick. "Though eventually we became more used to the system. It'll get a little easier each and every time."

The first year centered almost entirely on preparation, with much of the focus on rudimentary interviewing skills, the basics of feature writing, and how to lay out pages using the program InDesign. With so much prep work, however, there simply wasn't any time to actually churn out an issue.

"You're introducing everything, everything's new, and you don't just have something already established that you can jump into," Alder said. "Two weeks of training in itself is teaching the kids how to interview - you've got to teach them how to ask open-ended questions."

The students started writing articles in September, averaging four or five apiece for the first semester, though not every article would be ultimately destined for print.

"We have three baskets for stories," Broderick said. "One is what we definitely want to put in the newspaper, one is maybe, and one is called 'park,' which means we don't want to go any further with it."

Alder said there are a number of criteria that might cause an article to be parked, though the main reasons are due to a lack of research or the potential for the article to get the writer into trouble. "A lot of it is teaching them responsibility, because they have to be careful about what they print," she said. Fortunately, every student takes part in copy editing their classmates' work, which has given many of the students a new perspective on their own writing styles.

"I'm not the strongest writer, but reading other people's sentence structures, it really helps me," said editor Erin Lambert, a sophomore. "Now, for example, when I have to write an essay question for another class, I think about it and rearrange my words. It's helped me become a better writer."

One of the students' biggest challenges, aside from lack of time outside of class, is the fact that Alder's room has just six classroom computers, which forced student editors such as Lambert to come to class at odd hours just to make sure the paper could get done.

"It's hard to get things done in a rush when you only have a limited amount of time to do it in," Lambert said. "I've been coming in at lunch the last few weeks, and I'm in her class at least two hours a day. We've had a lot of pressure to get this first paper out because we were working on it last year and this year, and lots of teachers kept asking, 'When's it going to come out?'"

But ask any student in Alder's class if the challenges were worth it, and the answer's likely to be a resounding "yes." The whole class is eager to see their first issue hit the stands, and while they know they still have a lot to learn, each student is proud of what they've accomplished.

"I think it'll be good," Lambert said. "And as we put out more editions, we'll keep getting better, because we'll be more experienced."