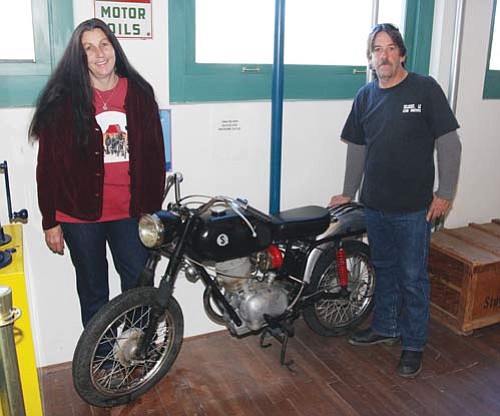 Local filmmaker Kirk Slack and his wife, Yvette, stand alongside a 1966 106 SS Sears motorcycle the couple recently donated to the Kingman Historic Route 66 Museum in the Powerhouse Visitors Center. A longtime motorcycle enthusiast and collector, Slack said he purchased the motorcycle in Montana about eight years ago but decided to donate it to the museum after receiving its assistance on a Route 66 documentary he is currently working on. "It's almost done, I'm in the final editing right now, and it'll be out in about two or three weeks," Slack said. "They might even play it there at the museum." Despite being built in 1966, Slack said the motorcycle, which was built by Italian manufacturer Gilera and marketed by the Sears Roebuck company, still bears a close resemblance to the motorcycles that sped up and down Route 66 during its mid-century heyday. "I didn't know Sears made a motorcycle, and so did JC Penney and Montgomery Ward," said museum curator Shannon Rossiter. "I never knew that and that was my era." Rossiter, who accepted the gift, said the museum had been looking for a motorcycle for quite some time, and to have a "'66 on 66" only seemed appropriate. The motorcycle currently occupies a space along the wall near the museum's Studebaker exhibit, though Rossiter said the museum will eventually give the motorcycle its own proper exhibit. "I couldn't think of a better place for it," Slack said. "It looks really good sitting there."