Mr. D'z gets another A-plus
Diner on magazine's 'Best of Arizona' list 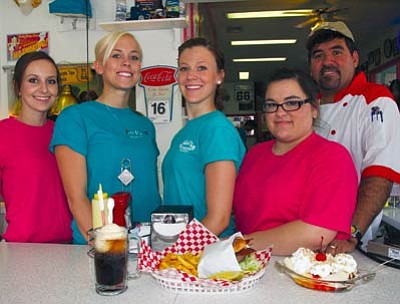 KINGMAN - For the second year in a row, one of Kingman's local restaurants has received statewide recognition through Arizona Highways Magazine.

Mr. D'z Route 66 Diner at 105 E. Andy Devine Ave. was selected as one of 50 entries in the August edition of Arizona Highways' "Best of Arizona" cover story. The story, compiled by associate editor Kelly Kramer, is the second-annual version of the feature, designed to highlight statewide superlatives in dining, lodging, culture, nature and several other categories.

"The mission of Arizona Highways is to promote travel throughout Arizona, so we look at different categories - when people are traveling, what do they like to do?" Kramer said.

The list consists of 50 esoteric "best" categories, such as "Best Place to Stare at a Rock" (the museum of Northern Arizona in Flagstaff, home of the Winona meteorite), "Best Reason to Sleep with the Light On" (the haunted Hassayampa Inn in Prescott) and, of course, "Best Place to Fall Under the Spell of a Hoodoo" (Coal Mine Canyon, near Tuba City).

"Those were really just the brain children of me and our editor Robert Stieve," Kramer said. "We tried to do our best to come up with, hopefully, clever titles for these things."

Mr. D'z entry is, unsurprisingly, listed under the dining section of the feature, where it carries the distinction of having the "Best Beer Without a Buzz." The category refers to the Route 66 diner's famous root beer, which talk show host Oprah Winfrey famously sampled in 2006, then gave to her entire studio audience.

"There's definitely something special about the sweet drink at Mr. D'z," Kramer writes. "It's cold and creamy and kind of like drinking a bunch of caramel candies - only better." Kramer also singled out the restaurant's bacon cheeseburgers and banana splits as the two other menu items that "should make their way from the menu to your belly."

Kramer said she and Stieve hadn't originally planned on including Mr. D'z in the feature until they dropped by on their way to Hualapai Mountain Park.

"We thought, you know, we've heard about Mr. D'z, so we headed in there for lunch," she said. "And we were like, 'This has to be in there.' We just felt it was a perfect fit for the magazine."

When approached about the article, Mr. D'z proprietor Armando Jimenez expressed pleasant surprise that his restaurant had been featured, as he couldn't recall being approached by anyone about the story. He was more than happy, however, to whip up a bacon cheeseburger, banana split and root beer float for independent taste verification.

They passed with flying colors.

Mr. D'z is not the first Kingman restaurant to be featured in Arizona Highways Magazine. In March of 2009, the magazine profiled Hubb's Bistro at the Hotel Brunswick as among the top 25 restaurants in the state, citing the bistro's unique menu selections and knowledge of fine wines. Unfortunately, the bistro was closed when the hotel went out of business in January - something Kramer admitted she's seen happen increasingly often lately in her travels around the state.

With a global monthly circulation of 120,000, Arizona Highways claims subscribers in all 50 states, as well as in 120 countries around the world. The August issue is currently available on magazine racks at book stores and supermarkets throughout the state.