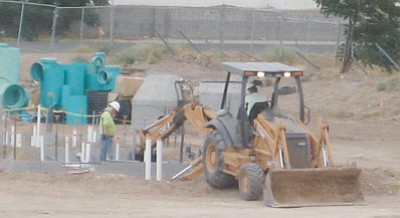 ERIN TAYLOR/Miner<br /><br /><!-- 1upcrlf2 -->Crews digging a sewer line for the city of Kingman unearthed remains from the former Pioneer Cemetery this week on what used to be the southern end zone of the Lee Williams football field.

KINGMAN - The Mohave County Medical Examiner will remain onsite during construction of the new Lee Williams High School after remains from a turn-of-the-century cemetery were unearthed on the former football field this week.

Workers with CORE Construction were digging a trench for a sewer line Tuesday on what used to be the southern end zone of the football field when they began unearthing bone fragments, pieces of wood and what was possibly a brass handle from a casket.

Director of Construction for KUSD Oz Enderby said officials were aware of the cemetery's existence when they planned the location of the water utility easement for the city, which the school agreed to do in conjunction with the construction of the new high school. Enderby said the location was in the best interest in the long run and that crews were told to stop work if they unearthed any remains from the cemetery.

Workers were about 40 feet into their excavation when they discovered the remains Tuesday. Work was halted and officials met Thursday on how to proceed.

Rumors have swirled for years about bodies buried underneath the football field. Portions of the field and surrounding area were located on what was once the home of the Pioneer Cemetery.

From 1900 until 1917, the cemetery served as the primary burial ground for residents. According to research done by Mohave Museum librarian Kay Ellermann and historian Kathy Block as part of the Arizona Pioneer and Cemetery Research Project, more than 400 people were buried in the cemetery.

After Mountain View cemetery opened in 1917, officials began moving bodies out of Pioneer Cemetery for a fee of $45. If families couldn't afford the fee, they left the caskets where they were. The cemetery was formally abandoned in 1944. Most of the remains that were left behind were in unmarked graves.

Kingman Junior High was built next to the cemetery site in 1948. Kingman High School was built on an adjacent site in 1957 and took over the junior high buildings in 1972.

Ellermann's research cites anecdotal evidence of students bringing bones to classes after they were unearthed during construction of a new gymnasium in the early 1970s.

In 2009, White Cliff students moved into a new building on Prospector Street and it was decided to turn the south campus into the new Lee Williams High School, set to open for the 2011-2012 school year.

A memorial containing unidentified remains from the cemetery was built some time ago. That memorial has not been disturbed and will be located near the student drop-off point at the new school, Enderby said.

KUSD Superintendent Roger Jacks said the discovery of the remains has caused slight delays in construction.

"Our larger concern is over the remains and the proper handling of those," he said.

Workers have about another 100 feet of excavating work. Should any more remains be found, their location will be marked with a GPS unit, removed by the medical examiner and stored at their Lake Havasu facility until a final resting place is determined.

Enderby said officials from CORE Construction, KUSD and the Medical Examiner's Office are working together in the effort.

"It's a sensitive situation, but it's being handled in the proper manner," he said.

Excavation of bodies, artifacts ends with a blessing
What lies beneath: Once hallowed ground beneath high school football field
Students will stay put during White Cliffs renovation
Rebuilding from the inside out
Stadium rehab ahead of schedule