Letters:You should be ashamed of yourselves 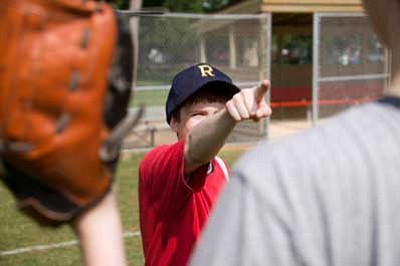 I have been following the letters and comments in the paper involving the Kingman North and South Little Leagues. I felt compelled to send a response based on what I have been reading.

I have lived in Kingman now one year and four months. I came from a small town in Oregon. My husband and I have been longtime volunteers with Little League and have coached for five years. We had hoped to continue our service here in Kingman. However, after this season, we'll definitely be considering devoting our volunteering elsewhere.

All I have seen all season long is a bunch of finger-pointing. The parents don't like something the coach is doing, the coaches don't like what the league, other coaches or the umpires are doing, and the board gets flooded with unnecessary phone calls. What happened to talking to the person who is doing or saying something you don't like? Are we all really that ignorant that we are incapable of having a conversation with another person and solving a problem? Isn't it OK for a person to have an opinion that differs from yours? I just don't understand the thought process that leads you to, "If you don't agree with me, I hate you and will do everything in my power to make others hate you."

Parents calling the board because they don't like something their coach is doing without talking to the coach first, umpires turning and walking away from you shaking their heads when you ask a question, coaches refusing to communicate with other coaches without resorting to name-calling and yelling is cowardly and disrespectful. If you want to shun and hate me because I demand a little respect from your child or because I expect the mouth of a 9- to 11-year-old boy to be clean, non-prejudiced and respectful, then so be it. I am able to comprehend and accept that your opinions may differ from mine. I personally am not going to hold it against you or hate you for it.

As one of the few female coaches in this league, I have never been or felt so disrespected, berated and belittled by conversations I have had with other coaches, board members and parents. I have been called names both on and off the field. My response: "I am sorry you feel that way." I can't change it. I won't dwell on it but rather question why you demand respect from me when you fail to show any.

All I really know is, what is going on here does not fall in line with the expectations or reputation that Little League has set out to achieve. Finger-pointing is going to get us nowhere. There are some serious problems that need to be addressed and fixed. Unfortunately, until the parents, coaches, umpires and board members check their egos at the door and come in open-minded, you can expect the same issues to crop up in the future that we have all witnessed these past three months. It deeply saddens me to watch what could be a fantastic program flushed down the toilet by those who think Little League is the gateway to their child's future in the MLB.