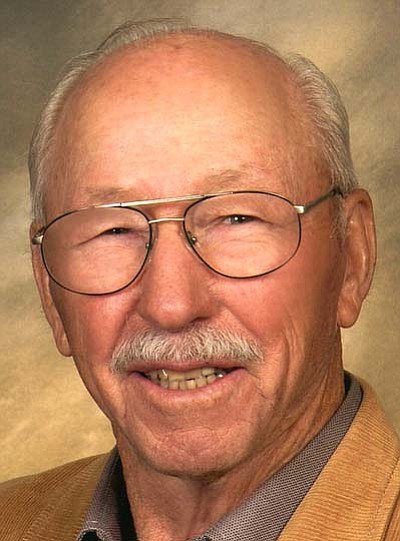 Dale Henry May, 81, passed away at his home in Camp Verde, Ariz., where he lived for the past 15 years with his wife, Bobbye (White) May.

Born in Hillsboro, Ill., Dale moved to the Kingman area as an infant with his parents, Henry and Leah (Masur) May. He grew up in Kingman and worked for his father's Mobile Oil distributorship driving a fuel truck at the age of 14. His family moved to the Prescott area where Dale attended Prescott High School for two years where he played on the state championship football team. After returning to Kingman, he graduated from Mohave County Union High School in 1948.

Dale enlisted in the U.S. Navy during the Korean War Conflict and returned to Kingman periodically, where he met and married Barbara Mae Kerr. He served as an electrician in the Navy's destroyer division on both the USS James E. Kyes (DD-787) and the USS Charles H. Roan (DD-853). Never decorated for his heroism, he saved the lives of his shipmates in the Sea of Japan when he spotted a floating mine off the bow of the USS James E. Kyes. After repairing the anchor's electrical switch, he stepped to the bow to enjoy the fresh ocean air and spotted the mine. He successfully obtained the attention of the bridge and directed the captain to steer away from the potentially deadly explosive. Although he said he wanted to run from the bow, he courageously walked down the side of the ship constantly pointing to the mine's location to successfully steer the ship away from danger.

After his tour of duty in the Navy, Dale became a member of the first police force of the city of Kingman. Dale was the third police officer on the force. Later, he joined Ford Motor Company when the remote proving grounds at Yucca were established. There he served as a test driver and managed the calibration of test equipment. He wrote numerous technical reports on the vehicles he tested, including the "Ford Tough" F150 pickup truck. He retired from Ford in May of 1980. He was an avid outdoorsman as a hunter, fisherman, camper and explorer of the Colorado, Utah and Arizona areas. He was also a lifelong caregiver toward countless animals.

Siblings surviving Dale May include one sister, Frances Bizjak and husband Gil of the Pioneer Home in Prescott; and two brothers, Harold "Sonny" May (Mamie) of Kingman and Donald May (Pauline) of Clarkdale, Ariz. Preceding Dale in death were a sister, Josephine Nivens (Pat) of Kingman and a brother, Kenneth May (unmarried) of Prescott.