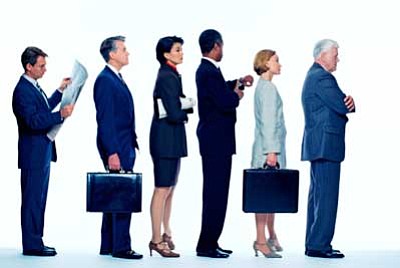 KINGMAN - Mohave County's unemployment rate tacked sharply higher for the month of May, rising nearly a full percentage point according to new figures released Thursday by the Arizona Department of Labor.

Adjusted for seasonal shifts, unemployment for the Kingman-Lake Havasu City metropolitan statistical area shot to 11.7 percent in May, up from 10.8 percent the month before, and well above the 10.9 percent rate of the prior year.

Seasonal adjustment plus an influx of new labor without a corresponding increase in jobs appear to be the primary reasons for the jump in unemployment. In fact, the number of total nonfarm jobs in the county actually increased over the reporting period, rising from 46,800 in April to 47,200 in May. The U.S. Census was by far the largest job creator during the period, causing the federal government job sector to swell by 400, to 1,000 total employees.

Most other private industries remained unchanged in May, though mining and construction did see a much-welcomed increase of about 100 jobs, to 2,700 total. Conversely, the professional and business services sector also dropped by 100, to 3,100, leaving total nonfarm private sector employment unchanged from April, at 38,100 total jobs.

According to the Department of Labor report, census hiring bolstered employment across the state and was easily the largest source of new jobs in May, accounting for 7,700 new hires. Construction and educational services also saw modest gains across the state, while professional and business services took the largest hit, shedding 4,600 jobs. The leisure and hospitality sector also fared poorly in May, with hotels and restaurants axing fully 2,500 employees statewide.

In total, the state saw a net gain of 3,400 jobs in May, with the seasonally adjusted unemployment rate rising only slightly to 9.6 percent. Arizona's rate remains just below the national unemployment rate, which fell to 9.7 percent last month, down from 9.9 percent in April.

Mohave County was not the only Arizona municipality to see a rise in unemployment in May. Most other large cities across the state, including Phoenix, Tucson, Flagstaff and Prescott, saw similar gains, though none as sharply as here. Yuma was the only major metro area to see a drop in unemployment, though it still retains the highest rate by far at 22.6 percent, owing to the area's highly transitory agricultural sector.

Michigan remains the state with the highest unemployment rate, at 14 percent, though Nevada is slightly behind at 13.7 percent. North Dakota has continued to place dead last in unemployment, with just 3.8 percent of its residents out of work.