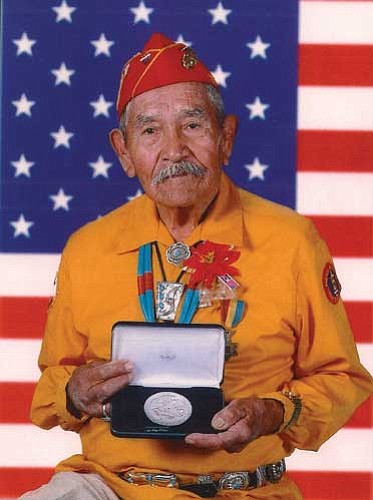 KINGMAN - A voice and a legacy from the past signed off forever last month. Rev. Lemuel B. Yazzie, 91, of Whitecone, Ariz., near the four corners area, died May 28. He was more than a missionary, pastor and father, according to his son Walter Kisemh of Peach Springs. Yazzie was a national hero.

Yazzie was a part of a select group of Navajo U.S. Marine Corps Code Talkers who served in World War II.

During the war, the U.S. military, and the Navy in particular, were having problems with their top-secret codes being broken by the Japanese. The Marines hit on the idea of using the natural language of some of its Native American soldiers in order to relay messages.

Many Native American languages use incredibly complex grammar and are so unlike any European or Asian language that they are nearly impossible to understand unless you grew up speaking the language, Kisemh said. The Marines recruited a number of Native Americans during the war to work as radiotelephone operators to relay orders to and from the front lines using their native languages.

The Marines were particularly interested in recruiting members of the Navajo Nation, which has one of the most complex languages in the world.

Yazzie joined the U.S. Marine Corps in September 1944 and was asked to become part of the Code Talker program because of his excellent English, Kisemh said. Once he entered basic training, Yazzie didn't see his home in Arizona

again until after he was discharged from the Marines in April 1946, Kisemh said. Yazzie served as a radio operator in the 4th and 6th Marine Divisions from July 1945 until March 1946.

"There was no resistance from these guys (Navajos) in wanting to help with the war," Kisemh said. "When it was time, these guys wanted to go and fight."

The Code Talkers would use certain words from their native language, such as the Navajo word for "bird" to describe a plane or "turtle" to describe a tank, Kisemh said. A bombing run translated from Navajo might be "Big bird dropping eggs."

Yazzie once told his son that sometimes even the Code Talkers had to think about what they were talking about. He also told Kisemh about serving on the front lines, under fire in Shanghai, China, during the war.

Marines in the program were told to keep the Code Talker program secret until 1968. According to The Independent from Gallup, N.M., Yazzie was awarded the Congressional Silver Medal in 2002 and was an active member of the Navajo Code Talkers Association.

After he was honorably discharged from the Marines, Yazzie returned to one of his high school sports, boxing. He won 35 professional prizefights. He returned home after injuring his right hand to work on repairing windmills for the federal government.

Then he found work as a machinist for the Atchison Topeka & Santa Fe Railway in California. Kisemh remembers long trips on the railroad from California to southern Arizona to visit his mother's family on the Pueblo reservation. He also remembers the long days his father would put in at the rail yards.

During his years working for the railroad, Yazzie found Christ through the help of a missionary. After 20 years of working for the railroad, he retired and attended Indian Bible Academy in Cottonwood, Ariz. He and his wife were commissioned as missionaries by the Conservative Baptist Home Mission Society in 1971 and set off to minister to the Navajo people in Whitecone.

He was later ordained a minister. He established the Tse' Bii' Otseel Bible Church and preached over the radio and in the jail as well as at the church. He also worked as a rancher in Whitecone.

"He was well known and loved in the community," Kisemh said.

Yazzie was buried in Veteran's Memorial Cemetery in Fort Defiance on June 5.