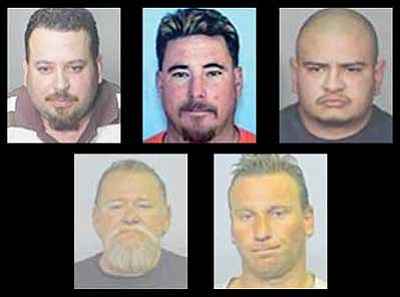 Sean Blackwell, 40, John Boone, 55, Michael Mayo, 30, Daniel Milea, 40, and his brother, Xavier Milea, 37, are the last remaining suspects out of an original 18 that were arrested in April 2008 after a lengthy investigation.

KINGMAN - The last five defendants in the Operation Picture Perfect methamphetamine roundup went on trial this week, though it could be several weeks before a verdict is delivered.

Sean Blackwell, 40, John Boone, 55, Michael Mayo, 30, Daniel Milea, 40, and his brother, Xavier Milea, 37, are the last remaining suspects out of an original 18 that were arrested in April 2008 after a lengthy investigation by the Mohave Area General Narcotics Enforcement Team. They face multiple charges, including conspiracy to sell dangerous drugs and illegally running an enterprise and use of wire communication for drug-related transactions.

All are residents of Kingman except Daniel Milea, who had moved to Bullhead City just before being arrested.

Their trial began Tuesday in Judge Steven Conn's courtroom, and prosecutor Greg McPhillips has said that he expects the trial to last at least a month. Five different attorneys are representing the individual defendants.

The other 13 defendants have all accepted plea deals in the case, including Jose Ochoa and his wife, Deaney, who were characterized as the ringleaders of the group.

Jose Ochoa, 37, pleaded guilty to four felony charges, including conspiracy to sell dangerous drugs, two counts of attempted transportation of dangerous drugs for sale and one count of money laundering in the second degree. He will receive 15 years in prison.

Deaney Ochoa, 32, pleaded guilty to one count of felony conspiracy to sell dangerous drugs. She will receive supervised probation.

Reynaldo Magana, who was characterized as second in charge, received 12 years in prison after pleading guilty early last year to felony possession of dangerous drugs for sale.

Prosecutors allege that the group was responsible for bringing an estimated 520 pounds of methamphetamine to the area in a year. With the average dose around a quarter gram, that's more than 900,000 hits, according to MAGNET officials.

No meth labs were discovered during the investigation. Officials say the methamphetamine was from Mexico.