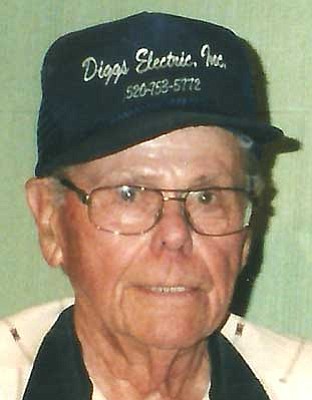 Merlin M. Diggs passed away peacefully on Feb. 26, 2010, at St. Joseph's Hospital in Phoenix with his children and his long-time friend, Fred C. Grigg of Hackberry, by his side. Merl was born on March 29, 1925 in Geneseo, Kan., to Floyd A. Diggs and Ruth I. (Dolby) Diggs, who preceded him in death.

When Merl was 4 years old, his family moved to the farm in Hutchinson, Kan., where he grew up. In September of 1950, Merl entered the U.S. Army. He served as a corporal in the Artillery Division during the Korean War. During this time, he was stationed at numerous Army bases throughout the U.S. His primary duties were those of a mail clerk. After his military service, Merl found employment with the City of Denver and with the Town Talk Bakery in Colorado Springs, Colo.

Merl moved to Kingman in 1955 and worked for E.M. Leonard at his salvage yard. In his spare time, he worked for Buzzy Wescott and his brother, Chalk Wescott, who flew building supplies on a fixed-wing airplane to Grand Canyon West during construction of the Guano Mines.

In November 1955, Merl went to work for Ford Motor Company at the Arizona Proving Grounds in Yucca. He was a test driver and an experimental brake mechanic. He retired from Ford in May 1980.

For 30 years, Merl enjoyed his retirement doing the things he loved. He enjoyed old cars and working in his shop. He could fix just about anything and spent much of his time tinkering on something old or building something new. Merl was an avid fisherman and loved the outdoors. He enjoyed spending time with friends and family. If a family trip involved camping, Merl was sure to be there.

Merl is survived by his sons, Jeffrey W. Diggs of Kingman, Brandon W. Diggs and his wife, Michelle, of Princeton, Minn., and his daughter, Darla Proferes of Kingman.

He is also survived by his grandchildren, Carrie Davis and her husband, Chris, and Krystal Diggs, all of Heber City, Utah, Meghan Tackett and her husband, Michael, Courtney Kluge, and Faith Proferes, all of Kingman. He is also survived by his great-granddaughter, Raeli M. Davis, of Heber City. Merl also leaves behind several cousins who reside in Kansas.

Viewing will be from 9 to 11 a.m. on Saturday, March 6, at Sutton Memorial Funeral Home. Services will begin at 11 a.m., with burial to follow at Mountain View Cemetery in Kingman.