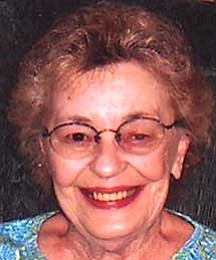 Our loving and devoted mother, Elizabeth "Betty" Simon, went to be with her Lord and Savior Jesus Christ on Saturday, March 6, 2010. Mother was born in Detroit on March 15, 1931. She attended McKenzie High School in Detroit.

He preceded her in death in 1992 on their 44th Wedding Anniversary.

Together, they were blessed with five children.

In June 1963, the family moved to Kingman and enjoyed many wonderful years. Betty was a charter member of Grace Lutheran Church. She enjoyed dancing and spending time with her family and friends.

Also surviving her are brothers Chuck Pollitt of Detroit and Larry Pollitt of St. George, Utah.

She also left behind many special lifetime friends both in Michigan and Kingman.

We look forward to the day we will all be reunited for eternity.