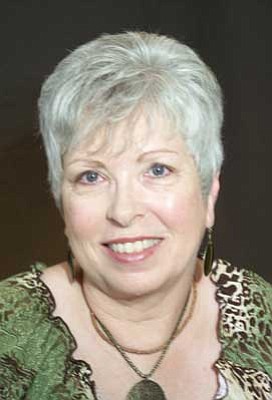 KINGMAN - You may already be a fan of Mona Hodgson's children's books. Her classic picture book, "Bedtime in the Southwest," has been a favorite of locals and tourists alike for five years running.

Now, however, locals will have a chance to fall in love with her all over again with the publication of her first work of historical fiction.

Hodgson will be signing copies of her debut novel, "Two Brides Too Many," from 9 to 11 a.m. Thursday at Curves, 3531 N. Moore St., Suite 1. She will bring several copies with her, but those eager to get a signed copy are urged to purchase their copy prior to meeting the author.

While "Two Brides Too Many" took only weeks to write, Hodgson said it was well over a decade in the making. A dirt road in Arizona's White Mountains sparked the idea for a novel nearly 20 years ago, leading Hodgson to immerse herself in the craft of writing fiction, and later to begin tapping out a historical novel set in 1890s Jerome. In the meantime, she wrote hundreds of pieces for magazines and nearly 30 children's books, but while her novel proposals had received much editorial interest, they hadn't garnered her any contracts.

Until now, anyway. Everything changed on March 31, 2009, when a fiction editor from WaterBrook Press, a division of Random House, contacted Mona's agent with the opportunity for the Arizona author to write a series set in an 1890s gold mining camp in Colorado. Mona said she jumped for joy, then immediately set about writing "Two Brides Too Many" in order to meet her brief two-month deadline.

The novel is part of the "Sinclair Sisters of Cripple Creek" book series, which features historical romances happening within the Cripple Creek area of Colorado, at a time when the mines there were attracting tens of thousands of goldseekers to the stunning countryside nestled on the southwest slopes of majestic Pike's Peak.

It its heyday, the boomtown was a full-blown Wild West experience with a lively social scene, an active railroad, and frequent skirmishes with the federal authorities. Each novel in the series includes a key romantic relationship and a true historical female character, trumpeting the spirit of western adventure, and exploring the inner lives of these complex women.

When asked what advice she would offer aspiring writers, Mona said, "Recognize and remember that writing for publication is a process and a journey that requires careful and intentional steps. Expect detours. Enjoy the adventure!"