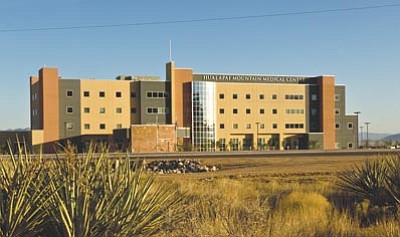 MedCath announced in March that it was looking at the possibility of selling some of the company's hospitals or selling the entire company. French has previously said that selling HMMC to a company or organization that would continue or improve the hospital's current level of service has been under consideration from the start of the project.

"While MedCath continues to explore its options regarding the sale of the company or sale of its interests in assets, a question may be asked if we would entertain the possibility of an acquisition by (Kingman Regional Medical Center) should they make an offer," French said in an e-mail to the Miner. "Through our medical staff and employees we have already improved the healthcare in the community. We are committed to continue down that path and we have no interest in conversations with the other hospital in Kingman, as we believe that is not a viable option."

In the meantime, the number of patients treated and the number of doctors practicing at the new hospital continues to grow, said HMMC CEO and President Duane Scholer. Orthopedic doctors Blake Stamper and Robert Lock II have recently moved their practice to the hospital. The hospital also continues to recruit out-of-state doctors.

"The hospital continues to meet our expectations. Whatever happens, the hospital is on a good path," French said.

New hospital could be on auction block
MedCath plans to put dissolve question to stockholders
Column: We see an exciting future for HMMC, Kingman community
Rumors swirl about HMMC, KRMC
HMMC turns out the lights