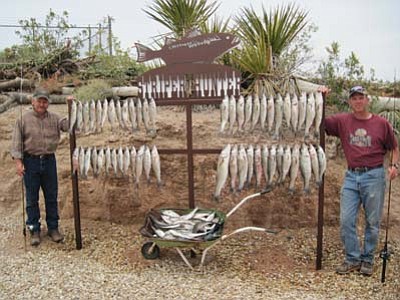 Local fishermen who have been trying to catch largemouth or striped bass this spring on Lake Mead are shaking their heads wondering what the heck is going on at this Colorado River impoundment.

And I'm right there with them.

Last Friday night, Jay Chan, Dan Reed and I were one of the 21 teams entered into the United Professional Firefighters fishing tournament out of South Cove on Lake Mead.

This tournament had three divisions anglers could fish in. Anglers could choose to fish in one or all of them. The divisions were largemouth/smallmouth bass, striped bass and catfish.

As usual, our team spent the first few hours of the tournament on Friday evening trying for largemouth bass.

We didn't do too bad either, checking in eight fish that weighed just over 8 pounds.

However, a number of good teams were right behind us, and they had checked in just five or six fish, and since the limit was 15 over two days, we thought that getting a check-in in that division would be real tough.

After checking in the bass, we decided we might be more competitive in the striped bass division. So we decided to tough it out and stay up all night and fish for stripers.

Turned out to be a bad decision. As the sun came up Saturday morning, we had just 39 stripers and one catfish to show for our efforts.

And to make matters worse, most of our stripers were small, and as we would find out later on, our bag weighed just over 37 pounds, and it was obvious we were not going to be in contention in that division either.

I was too tired to fish for bass after staying up all night, so we headed for my Meadview home to catch up on our sleep.

Later that day, we found out that we should have kept on fishing for largemouth. Many of the better teams had struggled, and we would have only needed to catch three 1-pound fish to check in the largemouth/smallmouth division.

Our predictions were true about our chances in the striper division, as we were over 8 pounds out of the money.

So we walked away knowing we had been beaten by some really good anglers.

But I for one wasn't discouraged.

After all, the grand daddy of all of the local striper tournaments, Stripe-R-Rama, is just a few weeks away, so more pre-fishing needed to be done.

So on Sunday night, just a day after the firefighters tournament ended, I had a couple of friends of mine who work for the Arizona Game and Fish Department come up to test the night striper fishing at Lake Mead.

Dave Williams, Mark Quigley and I got on the water about 9 p.m. Sunday night and I went to an area where I thought we'd do some good.

It didn't take long for Quigley to catch the first fish, a chunky striper that weighed over 2 pounds.

I caught a couple of nice stripers and then Williams got into the fray.

Williams hit the jackpot later in the night when he got a striper that weighed 5.05 pounds. Before the night was over, we boated 92 stripers.

Our 10 best fish weighed 25.56 pounds, while the next 30 checked in at 40.25 pounds. Our best 40 fish weighed in at 65.81 pounds, which would have easily took big fish honors and the top team money at the firefighters tournament I had fished in just two days before.

But that is how it goes when fishing at Lake Mead.

Sometimes you're golden and fill up the boat, sometimes you can't catch a thing.

I had a great time fishing with friends, and really that's what it is all about.

Now we'll just have to see what happens at Stripe-R-Rama on June 5 when Dan Reed and I will fish against some of the best striper teams in Mohave County.