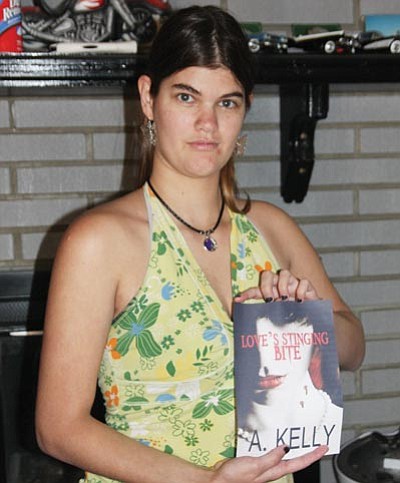 JC AMBERLYN/Miner<br /><br /><!-- 1upcrlf2 -->Aubrey Bancroft holds a copy of her recently-published first novel, “Love’s Stinging Bite,” at her family’s Kingman home May 14. The vampire romance novel is being published through a Maryland-based company and is available through its Web site, www.publishamerica.com.

KINGMAN - Stephanie Meyer was 31 years old when her first novel was published. Three more novels and a hundred million copies later, the vampire romance series "Twilight" has become one of the most popular and best-selling of all time, spawning films, merchandise and the adoration of tweenage girls across the globe.

By contrast, Aubrey Bancroft is only 19, and she doesn't expect her first novel, "Love's Stinging Bite," to sell even a million copies, let alone 100 times that. But hey, at least her vampires don't sparkle.

"No self-respecting vampire sparkles," she said.

A native of California, Bancroft moved to Kingman from Laughlin, Nev., about six years ago and graduated Kingman High last year. She said she always had a passion for writing and used to write short stories for her friends in school before setting on her first novel, which she describes as a reaction to the Twilight craze.

"Everyone was going on and on about it, and I was like, 'Oh my god, shut up about Twilight!'" she said. "If you're going to do a vampire story, you've got to do it right."

Bancroft first started writing what would become the first chapters of "Love's Stinging Bite" on the popular Web site fanfiction.net, a repository for millions of amateur stories based on popular works of fiction. "I was just bored," Bancroft said. "It was just for kicks, but people who read it said 'Get it published.'"

And so she did. After about five months of writing, Bancroft completed her 194-page manuscript in February and submitted it to a Maryland-based book publisher, PublishAmerica, who agreed to publish it the following month, just two days before Bancroft's birthday.

Bancroft said the book, which she wrote under the penname "A. Kelly," takes cues from several existing works, including the "Underworld" and "Lost Boys" films as well as the Southern Vampire Mysteries series by Charlaine Harris. "Love's Stinging Bite" features a world in conflict, where a group of rogue vampires and werewolves known as the Dark Ones have begun abducting humans to use as slaves - or worse.

"There's a war going on," Bancroft said. "They want to take over everything and pretty much kill everyone or enslave everyone else."

The protagonist is an 18-year-old human girl named Asuka Marie, who has only recently completed her training at an "academy" designed to teach survival skills against the supernatural. Asuka is part of the human rebellion fighting against the Dark Ones but is captured on her first reconnaissance mission after being betrayed by her best friend.

Before she can be killed, however, Asuka is saved by a vampire and a "hybrid," a cross between werewolf and vampire, who take her to meet their own group of supernatural rebels. Over the course of the book, Bancroft said one of Asuka's rescuers starts to fall for her, with potentially life-altering (or ending) results, while the heroine herself is forced to settle scores, both old and new.

While the book does get fairly violent - blood-sucking creatures of the night can only be so tame, after all - Bancroft said the romance and profanity are kept to strictly-PG levels, so both young adults and teens can enjoy it without their parents worrying. She said she's already planning a sequel, though she won't start on that until after she finishes her second book, the story of a girl who develops multiple personality disorder after suffering abuse from her alcoholic stepfather.

"For me, it's kind of like an experiment with realism," Bancroft said. "I'm trying to do something that's closer to home, that people can understand and relate to."

"Love's Stinging Bite" is currently available through PublishAmerica's Web site at http://www.publishamerica.net/product90921.html. The book has not yet been released locally, but Bancroft said she's working to get copies at the local library, as well as at Kingman High School. She said the local Hastings store has also agreed to allow her to host free book readings over the summer.

Bancroft's hope is that her books eventually sell well enough that she can afford to go to college to study becoming a forensic investigator, her dream job. In the meantime, she sticks to writing and actively encourages other potential authors to pick up the pen. After all, she said, it's the only way they'll ever know if they're any good, and nothing quite beats the feeling of seeing your work in print.

"I just really wanted to get something out there and published," she said. "It feels good to be able to say that."