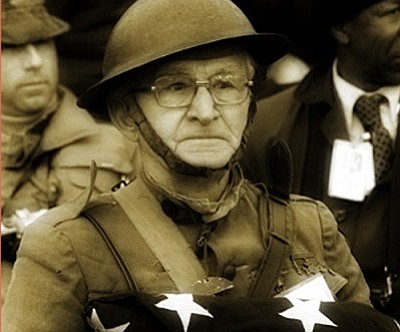 KINGMAN - Veterans Day is tomorrow, and with it comes the city's annual Veterans Day ceremony, which will be held, appropriately, at the Veterans Memorial in Locomotive Park downtown.

The ceremony is set to last one hour from 9:30 to 10:30, beginning with a line of flags presented by the Patriot Guard Riders and a kickoff from Marine Corps League Commandant Rick Shelby.

The opening ceremony will continue with American Legion Post 14 Commander Rick Van Horn leading the Pledge of Allegiance, followed by Joan Oxsen of the Route 66 Rotary singing The National Anthem.

Don Olin of the Marine Corp League will lead the hand salute and the lowering of colors to half staff, and Pastor Tom Pain of the First Church of the Nazarene will give the opening prayer.

This year's ceremony will include ten speakers including local State Representative Doris Goodale, Mayor John Salem, County Supervisor Gary Watson and Sheriff Tom Sheahan, in addition to local leaders of the VFW, the American Legion, the Korean Veterans Association and the Vietnam Veterans of America.

Perhaps most notable this year will be the final speaker, Beth Ambrose, the wife of longtime Marine Corps veteran and well-known humanitarian Jerry Ambrose, who died Oct. 10 following a massive stroke.

Ambrose had been deeply involved in local veterans' affairs, among many other causes, and labored for more than a decade to establish the Mohave County Veterans Council, a coalition of disparate veterans groups that only began meeting this August.