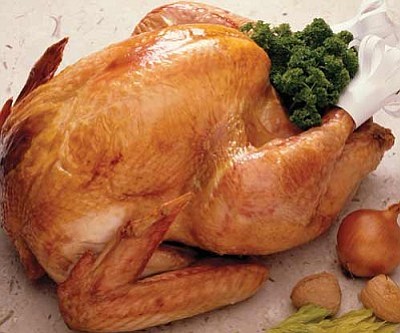 KINGMAN - Praise Chapel will distribute 100 vouchers for Thanksgiving dinners to needy families through this week.

The vouchers can be redeemed at both Safeway locations the week of Thanksgiving for a holiday dinner that includes a 10- to 12-pound turkey, mashed potatoes, gravy, cranberry sauce, dinner rolls and an 8-inch pumpkin pie.

Tracie Padilla of Praise Chapel said the church elected to hand out the vouchers versus providing frozen turkeys since many of the people that they serve are hospice patients, families living in motels or others without the means to cook the meal themselves. She added that several locations around town would be providing dinners the night of Thanksgiving.

This is the fourth year the church has distributed the dinners to local families as part of its Benevolence Program, which provides year-round assistance for things such as utility bills and prescription medicines.

The church distributed 85 dinners last year and has around 100 to give away this year. At $39.99 a dinner, that comes to about $4,000 needed to fund the effort, which is assisted by Good Sams and agencies that are a part of the Kingman Community Network Coalition.

The only requirements for the vouchers is that there are at least three members in the families, since the dinners feed between six to eight people, and that the family has a demonstrated financial need.

Local charities providing for those in need over the holiday season
Donating a Thanksgiving: It’s the season for giving and local charities need help to help others
Kingman Photo: Thanksgiving for All
Food Lines
'That's what Christmas is all about'