Updated: In Memory Of Thelma Rucker 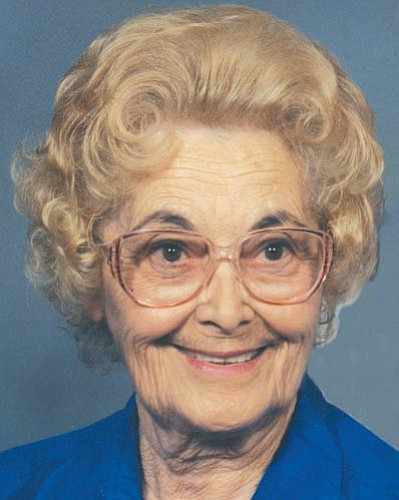 Long-time Kingman resident Thelma Rucker went to be with the Lord on Wednesday, Nov. 11, 2010.

Thelma was born Dec. 8, 1920, to Lona Elizabeth Smith Dollarhide and William Ernest Dollarhide in Frog Level, Ark., where she lived until the family moved to Kingman in 1932 during The Great Depression.

"Granny" received lots of enjoyment from her grandchildren and numerous great-grandchildren. She is survived by two sisters, Gloria Bolles of Kingman and Adeline Morris of Texas. Thelma is preceded in death by her mother and father, Lona and Ernest Dollarhide; her former husband, John Wells; and two sisters and two brothers.

Thelma operated the Cork and Bottle Liquor Store prior to her marriage to Ellis Rucker in 1969. Together, they started Rucker Motors in 1970. While Ellis operated the dealership, Thelma worked in the County Assessor's Office. She was recognized by the Mohave County Board of Supervisors upon retirement in 1997 for her 25 years of service at the age of 77.