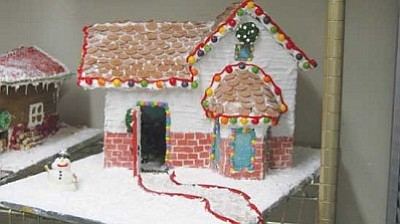 Courtesy<br /><br /><!-- 1upcrlf2 -->This gingerbread house made by Chef Michael Gaul’s culinary arts students are just a sample of the kind of entries Gaul is hoping to get in his Gingerbread Mania contest Dec. 3.

KINGMAN - In accordance with the holiday season, Kingman High School Culinary instructor Michael Gaul plans to host what he hopes will be the high school's first in a series of annual gingerbread house contests, dubbed "Gingerbread Mania."

Gaul said he got the idea for the contest from a similar contest held each year in Prescott. "I visited Prescott's' one year and saw their big gingerbread competition and always thought that the city of Kingman could do something like that," he said. "You've got to start somewhere, and I'm hoping I get enough interest that people will want to do it."

The competition, which will take place at the school Dec. 3, is open to all comers, not just Kingman High School students. Gaul said his hope is to get office pools, classrooms and other groups from all over Kingman involved in the contest. "I would love for people in the banks, the restaurants, the grocery stores to do one," he said. "I want to make this a community event."

Completed gingerbread or graham cracker structures should be submitted to the KHS cafeteria between 11 a.m. and 4 p.m. Dec. 3, with judging by a panel of local luminaries to take place at 4:30. Entry fees are $5 for gingerbread entries and $2 for graham cracker entries, with a $10 charge on multiple entries from a single group.

Prizes currently consist of ribbons for various age groups, though Gaul said the award plans and categories are still preliminary and may be expanded by the time the competition rolls around.

The prizes will be doled out during the main event, which runs from 6 to 9 p.m. at the KHS cafeteria.

During that event, attendees will be able to partake in all-you-can-eat penne pasta and breadsticks, featuring a variety of different sauces concocted by Gaul's culinary arts students. Dinner costs $5 per head, with all proceeds going to the River Cities United Way. Free entertainment will also be provided by KHS departments and clubs, and Gaul is encouraging anyone interested in attending to bring along canned goods to donate to the local food bank.

KHS beefs up number of contest entries
Run, run as fast as you can to 'Gingerbread Mania'
Kingman Photos: Candyland Houses
Gingerbread creations come to life for Kingman students
Photo: Chefs Unite for a Cause