Updated: In Memory of Donna I. Kelly 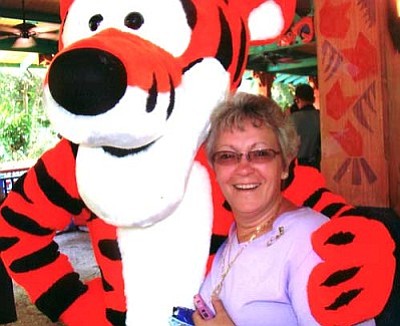 Donna I. Kelly, 51, of Kingman, journeyed home to be with the Lord on Thursday, Nov. 11, 2010, after a three-and-a-half year battle with metastasized breast cancer.

Donna spent her last 10 years with her significant other, Mike Colwell, EA, of Kingman and their female dachshund, Abbie.

During those years, she assisted Mike in running his business, 1040 Express Tax Service, until he sold it in early 2009.

Traveling was her passion, and she and Mike vacationed frequently. Her favorite destination was Kauai, Hawaii, where she spent much of her time enjoying the beautiful flowers and waterfalls. She always hoped heaven would be so lovely.

Donna spent her last nine days at the Joan and Diana Hospice Home, where she, her family and friends were treated with the utmost dignity and respect, for which we are all very grateful.

Donna was very giving in life and death, as she has graciously donated her body to science through Med Cure. Lietz-Fraze is handling transfer arrangements, and her remains will be cremated.

Blessed lady, you will be missed by many.

Rest in peace, my dear.