In Memory of: Jo Lela Convery 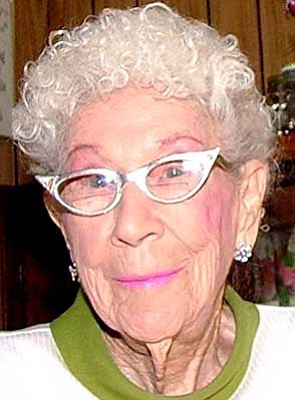 Jo Lela Convery passed away Thursday, Nov. 18, 2010, but lived a fantastic 102 years. She was a beloved wife, mother, grandmother and great-grandmother, and a Kingman resident for 48 years. She was born Feb. 22, 1908, in Shantytown, Mo. (Maries County), one of 10 children born to Connor Awalt and Eva Evans.

In her youth, Jo worked at the now historic landmark Pevely Dairy Company in St. Louis. Jo married Hugh Francis Convery, the one love of her life, in 1926. Their only child, Alice Sue, was born in 1930. The family moved to Los Angeles searching for work during the Depression. Jo was a homemaker during these years, and later Jo contributed to the war effort employed as a parts calibrator for Douglas Aircraft. She was also employed by the Radio and Television School.

In 1960, Jo and Hugh retired to Boulder City, Nev., and moved to Kingman in 1962, where Jo and Hugh enjoyed boating and fishing on Lake Mead.

Jo loved the outdoors, gardening and canning, and for many years was an avid league bowler as well an expert seamstress, often designing and making herself clothing as well as for her daughter, husband and other family members.

Jo and Hugh were married 50 years when he passed away in 1977. Jo was fiercely independent, outgoing, very active, loved by many, and although "retired," Jo worked for the Kingman Daily Miner as well as H&H Printing. Her terrific sense of humor and love of a good joke will always be remembered.