MCC accepts land from BLM, not sure of plans yet
College not looking to build another campus in Golden Valley 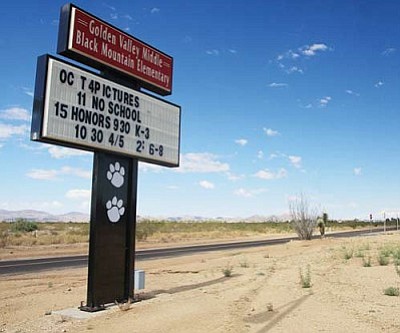 GOLDEN VALLEY - Mohave Community College has cleared a major hurdle toward building a new facility in Golden Valley, though such a facility may still be several years away.

At its Oct. 1 meeting, the college's governing board officially accepted the transfer of 12.5 acres of land from the Bureau of Land Management, located just west of the Black Mountain Elementary School at 3404 Santa Maria Road. In the works for the better part of a decade, the land transfer had laid dormant for a number of years prior to being revived by MCC President Michael Kearns two years ago.

"The MCC board of trustees back in 2001 moved to acquire that piece of property, and I think the original intention was, they were looking at a lot of growth in that area," said MCC's Vice President of Administration Lynn Cundiff. "They developed a plan to put some buildings there in four different phases. But over a period of time, it got dropped, and the college under Dr. Kearns' leadership rekindled the discussion about two years ago."

Cundiff said that, following the transfer of property, MCC will now have five years to construct some kind of educational facility on the land before it reverts back to BLM control. He said that the college had used its original 2001 plan to secure the transfer, but given the shifts in educational demographics over the years, it's quite possible that the governing board will choose to alter the plan to fit its new needs in the area.

"We're required to build as per the plan or make adjustments to the plan in order to build there in the next five years in order to retain the property," Cundiff said. "They released it to us as a public entity for this specific purpose."

The governing board's agenda noted that the property comes with a number of caveats typical for any BLM land transfer, including regulations about flora and fauna, easements on the property, and mineral rights. The college will also have to work with the Arizona Department of Transportation to develop ingress and egress for the property, and it must also request approval from BLM prior to construction if the proposed building plans are significantly changed. The college is also required to pay a token $25 each year for rent as well.

Cundiff said it's unlikely MCC will build a full-fledged campus at the Golden Valley site, with the board likely to opt instead for an intake center to service local prospective students, with perhaps a few long-distance classrooms to follow.

"A campus might have been the original intention of the board, but I think at this point the college will only be looking at putting an intake center there where people could come and enroll or get some information," he said.

"But even that's not been approved by the board at this point in time."

There are currently no immediate plans to begin construction at the Golden Valley location, and any such plans would need to be approved by the governing board as a part of the strategic facilities master plan.

Cundiff said discussion on any future building project for the property will likely lay dormant until the spring, when the board typically assesses its facilities and makes plans to adjust or expand them.