New law limiting pets may get a second look 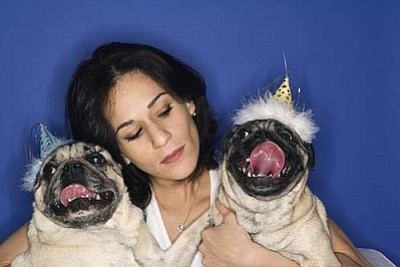 KINGMAN - The Board of Supervisors is taking a beating over its recent decision to limit county residents who live on less than an acre to two dogs. The revised ordinance, which also includes health and zoning regulations on kennels and sanctuaries, will go into effect 30 days after it is published in the newspaper.

But it hasn't been published yet, and District II Supervisor Tom Sockwell has indicated he might be flexible on the issue.

"This is not completely set in stone," Sockwell said late last week.

The Board may or may not take a second look at the situation, he said.

A member who voted for the revised ordinances, such as Sockwell or Board Chairman Buster Johnson, could bring the issue back before the Board for reconsideration.

Johnson may be the more intractable supervisor on this issue.

"The county is more than wide-open spaces," Johnson said, noting there are many areas outside of the three major cities where people live on one acre or less lots. Problems start to occur when neighbors in these areas have three or more dogs - especially when more than one neighbor has more than one dog, he said.

Johnson said when the issue came up, he started making cold calls to residents listed in the phone book. He said a number of them told him that their neighbors' barking dogs were a nuisance.

"You really don't want neighbors getting into a fight over barking dogs," Johnson said. He hoped the two-dog limit would decrease the amount of noise and complaints.

Residents who currently have more than two dogs can keep them, Johnson said. They just can't replace them if one of the dogs should die or run away.

District I Supervisor Gary Watson, who voted against the revision, said he saw no problem with the original four-dog limit.

"I didn't want to interrupt what people have now," he said. The county has enough issues enforcing animal ordinances now, Watson said.

His major concern was the amount of exercise dogs kept in long-term care facilities, such as animal sanctuaries, were getting. It's not fair to a dog to be kept in a 6-by-9-foot kennel for the rest of its life, he said. And what happens if a person can't get out to exercise the dogs, he asked?