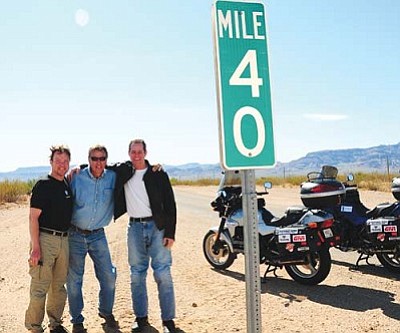 KINGMAN - It's not every day one gets the chance to drive through a photograph. But that's just what two childhood friends did this month on a 10-day odyssey that was 40 years in the making.

William Kay and Robert Olson, both natives of St. Louis, rode Route 66 through Kingman on Oct. 5 on the last stretch of a cross-country journey taking the famous highway from St. Louis to its terminus in California. The two made the trip to celebrate their 40th birthdays - Olson had turned the previous November, while Kay celebrated his on Sept. 24.

"He was the oldest born in our grade school class, and I was the youngest born," Kay said. "We've known each other since third grade."

The two had been planning the trip for more than two years, inspired by a milepost sign that Kay had spotted while researching the route on Google Maps.

"Two years ago, we were kinda riding around, and I said, 'Let's try to do something big for our 40th, something big that would involve a lot of people and help us celebrate together,'" he said. "I started to kind of devise what we might call this, because I like to put names on things. So 'Mile Marker 40' was the very quick title - I've always used the road as a metaphor for my life, and 'The Road not Taken' by Robert Frost is my favorite poem."

A public relations manager for the Show-Me Institute think tank, Kay decided to create a website for the trip complete with a mile marker logo. In searching for an appropriate "mile marker 40" along the route, however, he could only find one that did Route 66 any justice.

"I was Googling the words 'mile marker' and 'Route 66,' and I found that someone had referenced a mile marker in their photograph - that's when I learned there was definitely a mile marker 40 on a very well-defined stretch between Kingman and Oatman," he said. "I know the route between Kingman and Seligman was the first to be designated a historic route, so I picked up the phone and called the first photographer I could find, which was Rik Simon of Off Broadway Photography."

Simon snapped a photo of mile marker 40 and e-mailed it back to Kay and Olson, who spent the next 18 months staring at it, waiting for the day they would find themselves riding on that same stretch of picturesque desert highway. "I've been looking for other mile markers along the route, and what's so amazing is, nothing comes even close," Kay said. "There's only one choice, and it's your town."

The two men set out on Oct. 1, purchasing two BMW K75 motorcycles and working off the slogan, "Two friends, two wheels, two lanes." Four days later, they got their chance to drive through the photograph that had inspired the trip, bringing along a photographer, Egan O'Keefe, to document the magic moment along with Simon.

"It was really funny to see the mile markers tick down, 44, 43, 42," Kay said. "Then when we got close, Rik allowed us to pass him, and we got to ride through our photograph. It kinda gives you chills, creating this place of meaning from one mile marker out of 2,000."

The due reached the Santa Monica pier later that day, then started on the return trip to St. Louis, arriving on Oct. 10, or 10/10/10, as had been the plan. Upon their return, Kay said the two plan to use the story of their trip to raise money for the Greater St. Louis Community Foundation charity, with a goal of raising $20,000 by the spring, when they plan to complete the final leg of Route 66 to Chicago.

"We think there'll be a lot of friends who'll make the tip with us in Chicago," he said. "Once we're done with the fundraising process, we will write checks from the foundation fund, and they've chosen to waive all their fees so we can make sure that several children's charities benefit from this effort."

As for mile marker 40, Kay said that he and Olson hope to return one day, if not for the significance, then for the scenery. "Seeing all the other mile marker 40s in my trip, I definitely chose the best one - there is no other picturesque mile marker 40 along Route 66 in any of the other states," he said. "But there are a lot of great towns and great people on the way; and life's a little more fun off the interstate."