McCain drops by Kingman to speak with area Realtors 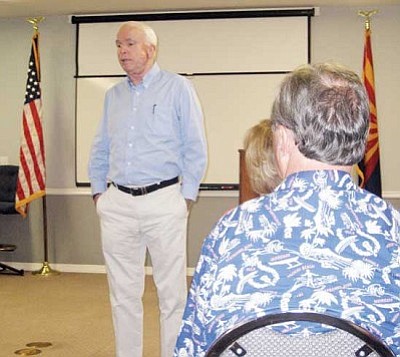 KINGMAN - Sen. John McCain was in a jovial mood Wednesday evening when he made a brief stop to talk with local real estate agents. The event was not open to the public.

McCain cracked a few jokes but quickly got down to serious business about the trouble in the housing market and the economy.

"You guys are on the cutting edge (of the economic problem), and your business has been hit the hardest of them all," he said. "It's one of my greatest disappointments that we didn't address housing at the time of the crisis."

Aid to the housing market should have been included with the plan to bail out the banks, McCain said. But several in Congress felt that once the banks were bailed out, the banks would turn around and offer loans and other help to the real estate market. That didn't happen, McCain said.

The real problem is Fannie Mae and Freddie Mac, he said. The federal government has dumped $45 billion into the two programs, the same outfits that caused the housing crisis by giving out loans to people who couldn't afford to pay them back, he said.

"I want everyone to own their own home, but there are some people who just can't. That's why we have a rental market," McCain said. He pledged to continue to help residents keep their homes.

McCain said that at the beginning of the housing crisis, he and now Secretary of State Hillary Clinton created a homeownership loan program that would have bought mortgages from people who were about to be foreclosed on, selling the home back to them using a loan. But some members of Congress decided it was better to bail out the banks, he said.

"The economy won't turn around until there is a stable housing market," McCain said.

The government needs to help businesses out by cutting taxes and reducing regulation.

As for the border between Mexico and the U.S., McCain wished President Barack Obama would stop by Arizona so he and Sen. Kyl could take Obama to the border and show him what was really happening.

"It's not secure and the violence continues," McCain said. There are people living in southern Arizona who have to deal with that violence and home invasions on a daily basis, he said. No one should have to live in those conditions.

"We can't enact other legislation until we secure the border," he said. "We are a nation of immigrants. We love immigrants, but we want immigration to happen legally."

Wesley Hassell from Realty Executives asked McCain his opinion on a value-added tax. A value-added tax is based on the estimated market value of a product and is added to the price at each stage of its production. The ultimate cost is borne by the consumer. A value added tax will significantly increase the cost of a home or any other product.

"I'm against it," McCain said. "We all know that we need to reform the tax code. I don't think this will happen. I think this is the worst time to raise taxes."

"I don't know," McCain said. The credit certainly had a positive effect on the market, but the housing market slowed almost immediately after the program ended, he said. Short-term programs, such as the homeowner tax credit, have that kind of effect.

"I would rely on your opinion. You are the ones who are working in this market. Is this a real solution or just a Band-Aid?" McCain asked.

The market could certainly use another boost, Hassell said. People are hurting and the industry is bleeding, but he didn't know how long it would be necessary to keep the credit in place to help the market.

"We're in a situation where even people with good credit can't get a loan," Hassell said.

Hualapai Valley Solar was looking to build a large concentrated solar plant in the area, said Wayne Wissinger of Eagle Realty. He asked what McCain was doing to bring growth into the area.

"Success breeds success," McCain said. "Arizona is ideal for solar. I'm all for it. I think it's a great thing."

However, he said he is worried about water, but new technologies are being developed that can help reduce the use of water by these plants.

Verna Schwab from Gold Coin Realty proposed a plan to bring jobs back to the United States. Her plan gives businesses manufacturing their product outside of the U.S. a limited time to move back into the U.S. or have their products taxed to the point that people would no longer purchase them.

Schwab also suggested the federal government go back to housing lenders and make them bring housing loans back down to current market values.

McCain explained that taxing products to that point would only hurt the economy and trade with other countries. What the U.S. needed to do was cut taxes on businesses, he said. The U.S. has an average business tax of 35 percent; Ireland has a 12.5 percent business tax. Where do you think a business is going to move? he asked.

"I believe in free trade," McCain said. Free trade programs with Latin American countries and Canada have worked out very well for the U.S.

"The U.S. has some of the most productive and innovative people in the world. The iPad wasn't developed in China," he said. "I have faith that the U.S. can compete in a world market."

Another real estate agent at the event said she specifically looked for and purchased items made in the U.S. She asked how bad the trade imbalance between the U.S. and other countries was.

McCain agreed there was a trade deficit between the U.S. and some countries, but cutting off trade to other countries wouldn't help matters, he said.

Caterpillar sells equipment to China. If trade with China stopped, China would only go to another company to get the equipment it needed and the money wouldn't come to the U.S., McCain said.

Mohave County Sheriff Tom Sheahan asked what McCain thought of Obama taking credit for the troop surge and the end of the war in Iraq.

"I think our Arizona National Guard is doing a great job," McCain said. Iraq will never be a place with weapons of mass destruction or a home for Saddam Hussein, and the U.S. now has an ally in the Middle East.

"So the president, who voted against the surge and against funding the troops, is now taking credit without one word about his predecessor," McCain said, smiling.

McCain paused briefly after the meeting to talk and take photos with a few real estate agents before moving on to another meeting at the Dambar & Steak House in Kingman. That meeting was also not open to the public.