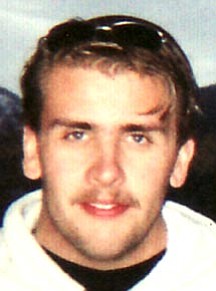 After enduring many years of pain, our beloved son, brother, cousin, nephew and friend went into the loving arms of God on Monday, Aug. 23, 2010.

Andy was born on Sept. 27, 1979, in Kingman; graduated high school in Laughlin, Nev., and lived the remainder of his life in Bullhead City.

Andy enjoyed engaging in conversations with people and touched many lives with his care and concern. Andy loved the simple things in life, like taking a walk, watching a sunset, and he definitely loved thunder and lightning. He was an avid reader and also loved to "chase storms" with his cousin, Del.

Andy was preceded in death by his maternal grandmother, Retha Osborn, and his uncle, Bill Osborn; both resided in Kingman.

He is survived by his mother, Bonnie J. Wood, and brother, Steven Szabo of Bullhead City; his father, Dean A. Szabo and step-mom, Janet A. Szabo of Bonney Lake, Wash.; paternal grandmother, Ethel Ellico of Kingman; his aunt, Betty M. Peterson, and cousin, Del Peterson of Kingman; three uncles, John Szabo of Hesperia, Calif., and Jeff Ellico and Brad Ellico of Kingman; and many other friends and his church family of the Potter's House.

A "Celebration of Andy's Life" service was held on Tuesday, Aug. 31, 2010, at The Potter's House in Bullhead City.

A private memorial by family and close family friends will be held at an undetermined time at Mountain View Cemetery in Kingman.

Jesus said: "Come all ye who labour and are burdened and I will give you rest" (Matthew 11:28).