Women who passed counterfeit bills may have ties to Kingman 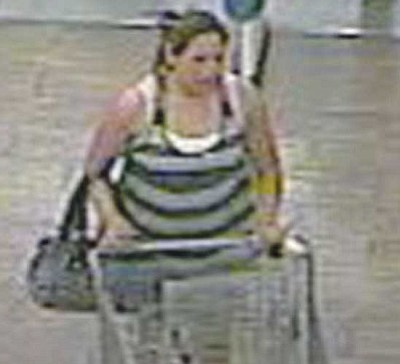 KINGMAN - Police in Bullhead City say two women who passed almost $1,000 worth of counterfeit bills at their local Walmart may have ties to Kingman.

Spokeswoman Emily Montague said that because the case is still under investigation, detectives won't release information on what those connections could be. The women were caught on surveillance cameras while using nine

counterfeit $100 bills to pay for their purchases Sept. 14.

One suspect is described as a white female in her early 20s, blonde hair with brown hair underneath and many tattoos. She has a large tattoo covering her upper chest area, tattoos on each of her shoulders, two tattoos on her back shoulders and possibly one on her leg. She was wearing a red and black striped dress, black high heel shoes and was carrying a black and white zebra print purse.

The other suspect is a white female, possibly late 20s to early 30s, heavyset with brown hair. She was wearing a grey and white stripe shirt.

The females left the store in what appears to be a silver passenger car.