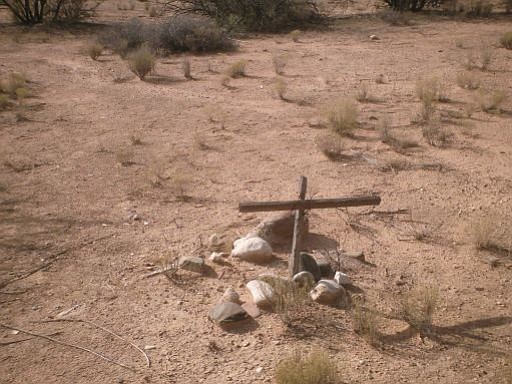 Photo by Aladreth December 2008, Grave in the middle of the Desert - Dead Horse Ranch, Cottonwood, Arizona

"Life you may evade, but Death you

So. Seriously, I used to be smart. I mean really smart to the three times power smart. My mother was well known for starting with another lovely woman, "The Gifted and Talented Program" here in Kingman many, many years ago.

I was in the program when I was in California and there was not a program in Kingman when I moved here 35 years ago. So, Mom and Miss Carolyn started the program.

It was really cool and I became quite close with some of those kids in our little 'gifted and talented' group and we stayed in touch for many years.

Then, snap, something happened. Not sure if Math got me or ditching a class here and there in High School, but I got dumb.

Now, many years later I've decided it is not my fault but it's because I went to Kingman High School at 400 Grandview Avenue and walked and ran on pieces of bodies buried under the parking lot and football field. Bad Juju, I tell ya.

When I was in high school, we all heard the rumors about bones being found on the football field. I never thought about where those bones ended up when they were found until recently. Now, I'm almost positive there are some pieces missing.

We were told not all the bones were located to be moved to the 'new' cemetery because the way they just came in there with bulldozers and disturbed everything. Now, I am not saying that's really what happened, I'm just telling you what we were told when we were teenagers.

Visiting the cemetery on Stockton Hill seemed to testify things not being too organized after the 'move' because all of the little stones labeled, "Soldier" or "Cowboy." I would ask about it and was informed that was all they could tell by the bodies when they dug them up - that perhaps they were dressed as a soldier or something. All this made sense but who knows?

Now, recently, with all the 'renovations' at the downtown school we find out what we knew all along - bodies, bones, pieces of jewelry and other artifacts were right under our feet.

I'm not sure who thought it was a good idea to do this. It kind of makes you wonder. I heard stories that the school 'officials' allegedly never knew about it. Ahem. How do you not know where you are building a school? Okay, not a school itself, but a school parking lot and a school football field. In my mind, still THE school.

I read reports stating the bodies weren't moved if the families couldn't afford to move the bodies. How nice is that of our little town? You would think someone wealthier in town at that time would have stepped up and done the right thing or someone would have made arrangements when they were moving one body to move the one next to it - or hec' just decided to change locations.

I also recently read about bodies piling up in different morgues around the country because the cities they are in can't afford to bury them and no family members have come to claim them.

It's disheartening. Someone famous said you can learn a lot about a place by the way they treat their dead.

Because. Well, just because. Don't folks think about the sacrilege of things? There are many cautionary tales of grave robbers who tried to steal from the dead and had all forms of terrifying things happen to them after their misdeed. On the other hand, Good Fortune came to those who would bury in the ground the skulls or other body parts that were found in the desert uncovered.

The Jewish religion 'sit' Shiva. They do this for seven days. Not just for the family and friends of the deceased but because they believe the soul of the dead lingers for those seven days, hovering near the body. The Jewish religion states all bodies need to be buried. As a general rule, they don't even use cremation and if you were to come across a dead person and you were Jewish, you would drop everything, take off from work and shell out your own money to bury this person by the end of the day. Even total strangers! Even criminals! Serial killers! All bodies are respected. One who is kind to the dead when there is no way the dead can repay them or return the favor is awarded the greatest kindness themselves.

Funerals and memorials help us remember what we lost to deepen our feelings toward the dead. It's always where we end up saying, "Oh, I never knew that about Bob!"

You go to the graveyard, "Levaya," I believe it's called. It's where you accompany the body to the grave - showing respect.

In Italy, Spain, Mexico and various other countries, they hold elaborate feasts for the dead. Many religions give prayers for the dead. The Catholic religion is well known for lighting candles and praying for the dead.

Would you leave a dead body on the side of the road for the vultures and possums to eat? NO! I don't think the human body should be treated like 'stuff' or a freak show or misused. Unidentified bodies, not returned to the families, unclaimed or unreverenced *always* brings news stories. There's always something on the Television about reporters and law enforcement who have worked unselfishly for years to try to find 'who' that John or Jane Doe is and to give the family and friends peace and rest.

Rules and moral laws are intact preserving cemeteries from disarray. We don't destroy tombstones erected by loving hands. We do not disturb the peace and tranquility of those who have finally been reposed from earthly care.

Christians have customary ceremonies and days for the dead. There used to be "Decoration Day" (now our Memorial Day) where most everyone would go to take care of the graves. Many stories in my family exist of members getting together once a month on Sundays to go to the grave sites of family and friends to remove weeds in the cemetery, dirt from the stones and to even have a nice picnic lunch in the peaceful graveyards of Missouri and Arkansas.

There are many online/web sites where people go out (even people in our Mohave County) to lovingly take photographs of graves and document them for people to follow their ancestry. I know of several folks who have actually taken thousands of pictures and taken their own time to load them up on the computer. This is all free and people volunteer.

There's a famous story in Mexico of a boy who kicked a skull and said, "Why don't you come to my wedding?" The 'ghost' of that skull came to his wedding and was going to kill all the wedding party. Of course, it's an urban legend, but folklore, superstitions, and urban legends exist as 'warnings' and information we should heed. And this is it: ***The deceased are suppose to be resting in peace!!!*** We should meticulously protect the graves of the departed.

In the catacombs of the first Christians, the followers of "The Way" - the first Jerusalem followers of Jesus, contain lovely inscriptions written by friends. You can visit these tombs today under the city and see all of these tributes to the dead buried there.

Even the tombs and gravestones of the early 1700/1800's in America read in length fancy poems and words much different from what we have today.

Nothing less than good should be done after death. "Don't speak ill of the dead," comes from a Latin saying. Maybe while they were living they were pure evil, but somewhere they had a mother, father, siblings, children, some family and we owe that to them, even if they were as mean as snot.

Many Pagans, Wiccans leave food for the dead. Honey, apples, plums, raisins, grains, rices, and the such are left at gravestones or out during special times of the year for the spirits who have 'crossed over.'

In Greek mythology there were harsh lessons from Zeus's Mountain to those who dared insult the remains of a departed one. In folklore and legend, the soul, loving the body, wanders about on earth where his body was 'left' for many days. Some religions say at least seven days. Some say 40 days and some say forever. Especially if the death was an unsolved murder or a tragedy of suicide.

I was walking along in Dead Horse Ranch, Arizona a couple years ago. You might recognize Dead Horse Ranch as being the State park near Cottonwood, Arizona. In the State park you will see graves / 'markers' right smack dab in the middle of the desert. These graves are honored even out in the middle of 'nowhere.' I will attach a photograph I took of one of these beautiful places. I hope you'll see how the grave is marked. Nothing fancy, but, hey, no one paved a parking lot over them or placed a 50 yard line on them.

By now you have noticed I make a fuss about things. Especially things I feel are injustices. However, I always try to end a bit with a hopeful word or some idea we might get it right at some point.

Well, those little stones at the new cemetery on Stockton Hill just happened to have some respectful visitors recently. I like to imagine a lovely tall woman with long straight black hair placing pretty flowers and Hawaiian Leis over these small stones. Maybe she brought her daughter to teach her respect for the dead or maybe her own mother had died recently and left all these things to her. Mothers like to craft and maybe her mother had lots of plastic flowers and pretties built up in the craft room. She said, "Come, daughter, let me tell you a story. These people lived once here in Kingman. They were the Pioneers of the town and others who had come here and fallen on hard times. They had children, they had husbands and wives. They maybe came here not of their own accord. Maybe they were enslaved to someone here. Maybe there was a crime committed against them or maybe they just lived a long, long time and died a natural death. But, their bodies, daughter, their bodies might not all be in one place, and we need to give them a gift, we need to lay down a flower or two to tell them we remember them." And her daughter helped her run through all the small stones throwing Hawaiian Leis and plastic red, white and blue flowers on the stones.

I live a good fantasy life and make up stories such as these often. You should hear the stories I work up in my head about my neighbors! But, I was so proud someone had noticed those little stones again and really cared that the graves of their fellow Kingman PIONEERS had been disturbed once again and maybe they thought that some who were buried in the 'new' cemetery deserved to be honored as well. Ya just never know, they may be missing some pieces back at the school, maybe their leg in a bucket, maybe their arm in Northern Arizona at a dark, cold building or maybe they have a skull under the dirt at the school under renovation on Grandview Avenue.

And ... Thanks for all the apples and flowers.