Parents of infant left in car have court date 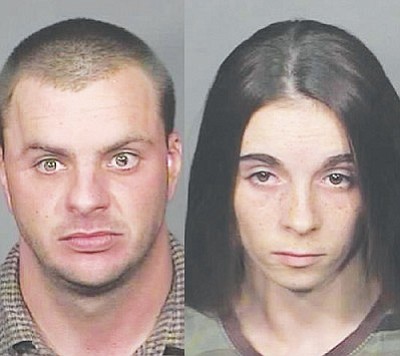 KINGMAN - Two parents charged with leaving their 7-month-old son in a car while they shopped at Walmart will appear in court this week for a status hearing.

Jason Carl Vogt, 29, and Melissa Venna McElrath, 21, are charged with felony child abuse after police said they left their infant son in his car seat with the windows rolled down Aug.

5. The couple was reportedly inside the store shopping for shoes, cake and a bag of ice.

Bystanders passing the car heard the baby crying and called police. They also gave him water after he appeared cool and clammy to the touch. Kingman Regional Medical Center measured the baby's temperature at the hospital at 101 degrees.

Police say that when the couple saw police around their car upon exiting the store, McElrath ran up yelling, "My baby! My baby!" The couple told officers they were in a rush and forgot about the sleeping baby in the backseat.

It is believed that the baby was in the car for around 20 minutes.

The child was placed in the custody of Child Protective Services after the incident. Inquiries as to his status were unreturned by CPS.