Despite ed cuts, arts still available
Audit shows that most students have access to at least one arts class a week 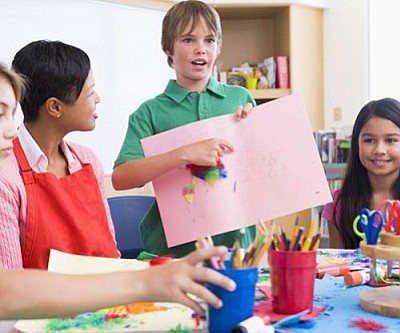 PHOENIX - Geraldine Arrieta said her life turned around when she started dancing.

Arrieta, a high school senior and president of the Maryvale High School Dance Club, described herself as an angry child, one who used to pick fights with fellow students and anger teachers.

But in her freshman year, when she starting dancing, her priorities changed. "I think it was the fact that I could be free, be myself," Arrieta said, "As soon as I walk into the dance room, I can take a deep breath and let go of everything for that hour."

Big cuts to public education funding over the past two years have fueled fears that dance, music, theater and other arts won't be as available to students like Arrieta. But a new report on Arizona schools suggests that isn't the case.

The Arizona Arts Education Census, a report from the Arizona Department of Education and the Arizona Commission on the Arts, found that 87 percent of students have access to at least one arts class a week.

"It was higher than I expected, so that was gratifying," said Lynn Tuttle, director of arts education and comprehensive curriculum for the Arizona Department of Education, who had expected the numbers to be in the 70 percent range.

Data for the census came from a voluntary survey sent to all Arizona public and charter schools between March and September 2009. Surveys were returned by 409 schools from across the state and represent more than 236,000 students.

The census also revealed areas where arts education could improve.

The study found that 61 percent of schools don't weigh art classes equally with other courses, and the number climbs to 79 percent for advanced art classes.

Tuttle said this creates an artificial barrier because GPA-conscious students will take math or English courses that will bolster their class ranking instead of art classes.

Tom Horne, state superintendent for public instruction, said unequal weighting is a problem because usually the students who are immersed in the arts are the ones earning the best grades.

"If the students getting the best grades are discouraged from taking arts classes, that's really tragic," he said.

The census showed that arts spending is low, with 79 percent of schools spending less than $1 per student a year on arts programs. Half of the schools reported having no budget for arts supplies.

"We need to work with our leadership more on how to use their budgets and gain achievement across all core areas," he said.

Petersen-Incorvaia said creative budget management has allowed Phoenix Union to avoid cutting any art teaching jobs in the past two years. The district even hired an additional arts instructor this year, he said.

The report also found that more than 134,000 students attended schools that didn't have highly qualified music and visual art teachers. Many schools turn to visiting professionals and field trips to fill this need, it said.

Amanda Kinnaird, the dance company director for Maryvale High School, said that the art community might need to become more involved with education through donations, fundraisers or even free workshops for students - anything to fund arts programs.

"I definitely think that they're absolutely valuable and beneficial, and we need to find a way to do that whatever that may be," she said.

• High schools that weigh arts equally with other subjects: 39 percent