Kingman photo: Into the Pipeline 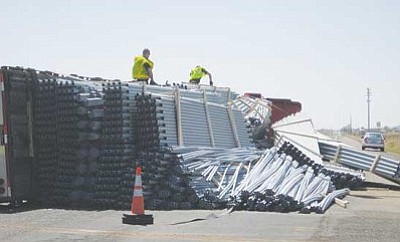 Officials with the Arizona Department of Transportation got creative in trying to right an overturned semi-truck hauling a load of piping. The truck overturned around 11:45 a.m. Wednesday as it was leaving the airport industrial complex and pulling onto westbound Route 66. The driver told officers with the Department of Public Safety that he was making the turn when he felt the load shift and the truck tipped onto its side. High winds could have also played a factor. Traffic was backed up on westbound Route 66 for more than an hour while crews worked to clear the road. Ultimately the lines holding the load were cut and tow trucks from ATR Towing used chains to pull the truck up from its side.