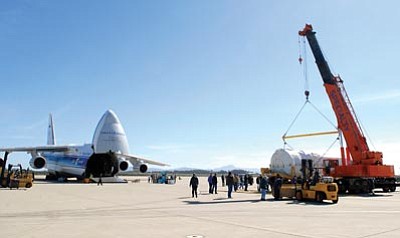 SRA ANDREW SATRAN/U.S.A.F. <br /><br /><!-- 1upcrlf2 -->Critical rocket components are loaded off an Antonov AN-124 aircraft and moved onto an awaiting flatbed trailer. The 30th Space Wing at Vandenberg Air Force Base serves as a strategic rocket and missile launch site for both unmanned government and commercial satellites.

VANDENBERG AFB, Calif. - About 100 miles or so from the glitz of Hollywood and the sights and sounds of Venice Beach, Sunset Boulevard and Rodeo Drive, lies an area that breaks most stereotypes about California. Amid the rocky surf of the Pacific, serene cow pastures and vineyards standing tall on the hillsides, the son of a Kingman couple is helping manage one of the largest space and missile complexes in the world.

Air Force 2nd Lt. Miguel Gaytan, son of Miguel Gutierrez and Bertha Alvarez of Kingman, is playing an important part in America's military space mission at Vandenberg Air Force Base as a member of the Air Force's 30th Space Wing. The wing manages the Department of Defense space and missile testing mission, as well as the placement of satellites to polar orbit from the West Coast.

Gaytan is a facilities engineer with the 4th Space Launch Squadron at Vandenberg Air Force Base. "My job affects the whole base in some aspects," said Gaytan, who graduated in 2005 from Kingman High School. "I work with getting the infrastructure ready with power."

In addition to Gaytan and his unit, the Vandenberg mission also includes the X-37B Orbital Test Vehicle mission, dealing with nuclear threats, training students in the missile fields and the growing demand for Global Positioning System coverage. "We launch satellites here that provide the main life line to our military out on the front lines," said Gaytan, who is a 2010 graduate of the University of Arizona in Tucson. "Communication between systems is the key for a successful campaign, and here at Vandenberg the satellites we launch help provide a key link in the system."

With its unique mission and isolated location, Gaytan and his fellow Vandenberg airmen feel they have a lot to offer to the space and missile missions. "I enjoy the work, and the location is second to none," said Gaytan.

You won't find Gaytan and the other men and women at Vandenberg strolling down Rodeo Drive or taking a run across Venice Beach, but you will find them in the middle of one of the military's busiest and most important space and missile missions within the Department of Defense, and maybe passing a cow or two along the way.