In Memory Of: Elesieve C. Krenz 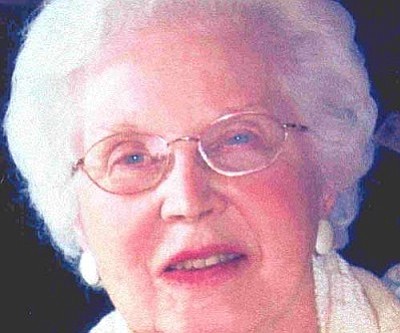 Jonni was a 1938 graduate of Johnson High. Her working career took her from Brown Publishing Company to the Emporium to Irene Brown's all-girl band, to the Dakota Round Up country-swing band, to co-ownership of the Pem Theatre and Krenz Sales in Wabasha, Minn., to the directorship of the Oldies But Goodies senior citizens band. Her singing career led her to perform with such music stars as Jerry Reed and Rex Allen. Retirement took her to Kingman, where she resided until her move to daughter Pam's home in Wabasha. Her final move was in 2001 to the memory care unit of Boutwell's Landing in Stillwater, Minn., where her care was over-seen by daughter, Kathy. Jonni will be greatly missed by her family and friends and by all of those whose lives she touched with her music.

She is preceded in death by her parents; sister, Katherine Redepenning; and husband, Harold E. Krenz. She is survived by her children, Teri Verbeet (Gene) of Bodfish, Calif., Pamela Nesler (Jerry Collier) of Rochester, Minn., Kathy Schultz (Kirk) of Stillwater, and Michael Krenz (Lynn) of Kingman. Survivors also include nine grandchildren and four great-grandchildren.

Services were held at 11 a.m. Saturday at Bradshaw Celebration Of Life Center, 2800 Curve Crest Blvd., Stillwater (northwest corner of Highway 36 and County Road 5). Interment: Union Cemetery. Visitation: One hour prior to the service.