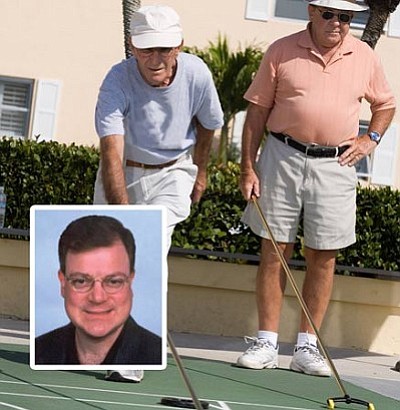 Take Our Daughters and Sons to Work Day ought to be expanded.

One day every April - this year, it'll be on Thursday - parents bring their kids to workplaces to help them "envision their future and begin steps toward their end goals."

It's a great program, but why limit it to kids 8 to 18? In these difficult economic times, we middle-aged people need dreams and aspirations, too.

That's why, every year, I spend that day shadowing my parents. They are retired.

It usually begins at 5:30 a.m., when my father and I drink coffee and complete the crossword puzzle.

My father asks me for a three-letter word for a son who gets on his father's nerves, but I'm never very sharp at that hour.

Shouting out several wrong answers, I accidentally wake Mom, who stumbles in to join us.

"What do you want with us?" she says, rubbing her eyes.

As I jump up and attempt to prepare her coffee, I drop a carton of milk on the floor.

"Your father is calling you from the other room," she says.

I don't hear his calls, though. All I hear are his heavy steps heading to the bathroom. He slams the bathroom door shut just as I get there.

"If you're going to finish the crossword puzzle in there, can you hand me the Reader's Digest?"

Later that morning, Mom explains that every month, she and Dad receive two deposits in their bank account - one from a private retirement account, one from Social Security.

"Now that's what I'm talking about!" I shout, as Mom and Dad roll their eyes.

Dad and I head to the bank to get some money. The manager has her young daughter with her at work.

The girl proudly tells me she will be a bank president one day.

By early afternoon, I am really taking to the retired life. As Mom leaves the house to go for a walk with her retired friends, Dad and I watch "Judge Judy."

"How do you think she'll rule on this one?" I say.

"Your mother worries about you," he says.

We are both pretty drowsy about then. I nod off on the family-room couch as Dad saws logs in his favorite leather chair.

I wake refreshed as Mom arrives back home.

"Why aren't you married?" she replies.

In 2003, the program was expanded to include boys. I say it's high time we expand it to include everybody else, too.

Aspiring to the simple retirement so many of our parents enjoy may drive more adults to make our politicians get our affairs in order.

If we don't get spending down, we face a certain future of massive taxes and a dead economy that will make retirement much harder for my generation.

After I splurged on dinner - it was two-for-one night at the subway shop - Mom and Dad told me they were very tired and needed to go to sleep immediately.

They thanked me for spending the day with them, then locked themselves in their bedroom.

I could hear them laughing at their television, though.

Remembering mom on Mother's day
Dad may be gone for 30 years now, but I still miss him
Dear Abby | New American wants to get U.S. social customs right
Dear Abby | Dad with baby daughter gets questioned by security guards
A Father's Day tribute