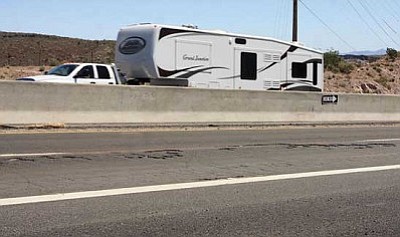 JC AMBERLYN/Miner<br /><br /><!-- 1upcrlf2 -->Stretches of crumbling roadway on Coyote Pass heading into Kingman will be replaced by new pavement when $10 million in road work on U.S. 93 is finished this fall.

KINGMAN - Teresa Corley, a single mother of three, knew she would get into a car accident in an area known as Coyote Pass one day - she just didn't know when.

On April 20, Corley was headed back to Golden Valley from Kingman on U.S. 93 when she lost control of her car and crashed into the side of the road after going over a 2-inch deep pothole. The accident could have been much worse, said Corley "I almost went off the edge of the road and creamed somebody else," Corley said.

She blames road conditions for the accident. Coyote Pass is filled with potholes, has uneven pavement and large ruts near the center lanes, she said.

Michele Beggs, the community relations officer for the Arizona Department of Transportation's Kingman District, said she recognizes the severity of the pothole issue at Coyote Pass.

Patched holes don't hold up very long and basically amount to ADOT workers placing Band-Aids on gaping wounds, said Beggs. However, without those Band-Aids the roads would be in much worse shape than they are now, she added.

U.S. 93 - between mileposts 63.8 and 71.3 - was slated for re-pavement last year, but due to funding issues, ADOT pushed the project forward to this year, said Beggs. Advertising for bids for the work begins today.

Corley's concern for road conditions grew in the last couple years because she saw some major accidents, including a 10-car pileup in January 2010. It is becoming a deathtrap, said Corley.

Although Corley needs to be examined for whiplash, she escaped the accident with minor injuries. But her finances took a hit once her insurance told her it was not going to pay to have her car fixed.

"They said I have worn parts," Corley explained. Those parts are worn from driving back-and-forth from Golden Valley and Kingman for several years, said Corley. She bought her car used less than three years ago and does not believe the inside of her tire rims wore down on their own.

"I'm sick of the conditions," Corley said. "The dirt roads in Golden Valley are better than the roads at Coyote Pass."

A local tire company told her it would cost at least $1,600 to get everything repaired and $600 to just get the car back on the road. She needed her car, so she paid the $600, but the front end still needs to be completely repaired, she said.

These financial hits come at a time when - like many others - she cannot afford them.

Just last year, a microburst destroyed her home's awning after another one took out the roof of her previous house. Top that with taxes and her house insurance going up, Corley said she can barely keep up as is.

"The financial troubles never end," Corey said. "It is just one extreme to another."

No one is responsible for microbursts, and people all over are dealing with increased taxes and insurance premiums. When it comes to financial troubles caused by Coyote Pass, Corley believes it is the road's fault as well as everyone responsible for the road.

Golden Valley Fire Department Captain David Martin said Coyote Pass was much worse in the 1970s. There were just two lanes and no center divider, which led to a lot of head-on collisions, he explained.

He suggests people slow down, be careful and always watch where they are going, which is something Corley said she has done since she started using the road to get to Kingman and back to Golden Valley.

Now the time has come to fix the roads. Beggs said the Coyote Pass project will be advertised to contractors today and bidding will open May 26. Construction should start in July as long as it is approved by the Arizona Transportation Board, said Beggs.

The project will cost $10 million and should be completed by the fall - maybe even September, said Beggs.