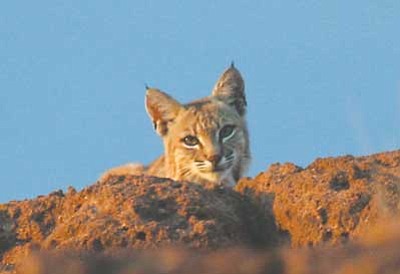 KINGMAN - An incident with a mountain lion on a golf course in Prescott on Wednesday and reported sightings of a bobcat or mountain lion in the Rancho Santa Fe subdivision in Kingman have Arizona Game & Fish officials reminding residents not to leave food or their pets outside.

Game & Fish officials killed a 2- to 3-year-old male mountain lion in Prescott Wednesday morning after the animal was spotted in a resident's yard near Antelope Hills Golf Course. When Game & Fish officers arrived, the cat ran onto the ninth hole of the golf course. Officers tracked the big cat to a tree where they tranquilized it, took it out of town and euthanized it because the animal posed a threat to humans and pets.

"We have certain protocols we have to follow," said Zen Mocarski, public information officer with the Kingman Game & Fish office. "We don't relocate mountain lions. Even if we could, where would we move them to?"

There is no way the department could prevent a relocated mountain lion from moving back into the area or moving into another inhabited area, he said.

The department receives several reports of mountain lions, bobcats, and bears each year in the Kingman area, especially from residents who live in the Hualapai Mountains, Mocarski said.

In fact, the department received a couple reports of either a bobcat or a mountain lion that killed a dog in the Rancho Santa Fe subdivision in Kingman, he said, but because the reporting party was reporting something that their neighbor had told them and no one has actually seen the animal, Game and Fish has no proof an animal is out there.

The best way to avoid these types of situations is to remove outside sources of food or water, Mocarski said. That means not only removing Fido or Fluffy's food and water dish from the back porch, but making sure that garbage can lids are secure and minimizing standing water, such as fountains or bird baths.

Food and water sources such as pet food and fountains will draw not only pets and other small animals, but larger animals such as coyotes, mountain lions and bobcats that prey on them and nuisance animals such as raccoons and skunks, Mocarski said.

A few years ago, the department had to kill a bear that was roaming through neighborhoods in the Hualapai Mountains, he said. When the department completed a necropsy on the bear, its stomach was full of corn. Someone had been feeding it or trying to feed other wildlife in the area and had attracted the bear.

"So who killed the bear? We certainly pulled the trigger, but what about the person that was feeding it?" Mocarski said.

Nearly every time the department goes to investigate a report of a predator such as mountain lion in a neighborhood, someone has been putting out food for wildlife, he said.

"Trust me, they don't need it, they have plenty of food," he said. "And even though we don't like to think about it, our pets are a food source too."

He recommends people let their pets, especially cats, out only after the sun is high in the sky. Most predators hunt at night or in the hours just before dawn and just after dusk, he said.

If you encounter an animal in your yard or near your house, harass them, Mocarski said. Spray them with a garden hose or throw rocks at them, do anything you can to make sure they feel unwelcome in your yard.

Most animals will run away. If it continues to return despite your best efforts or it appears sick or acting strangely, it might be time to call Game & Fish, he said.

If the animal turns to attack, don't run, Mocarski said. The first thing a prey animal does when it sees a predator is run. If you run, the animal will see you as prey and give chase, he said.

With mountain lions, make yourself as big as you can, Mocarski said. If you're wearing a coat or jacket, open it and flap it like bird wings, throw rocks or squirt the animal with a garden hose, he said.

He recommends a similar approach with the black bears in the Hualapais. These bears eat dead things, so if you try to play dead you may still be considered a source of food, Mocarski said.

He also recommends planting only native vegetation in your yard. If an animal can find the same food in your yard as it can in the desert, it's less likely to roam around your house, he said.