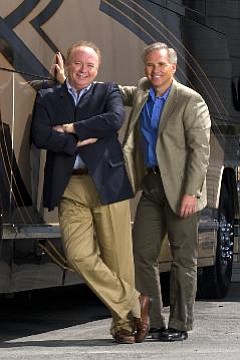 Joey and Trent Hemphill, the owners of Hemphill Brothers Coach Company, an American company in Whites Creek, TN, are all smiles after brokering a deal with the U.S. government to purchase two Canadian manufactured buses so President Barack Obama can tour American in luxury during his reelection bid. (Photo Courtesy of Hemphill Bus Sales website)

My blog this time is not going to be about one specific subject. I figured I'd take a page out of another playbook and tackle a few subjects in one blog that have been heavy on my mind.

Some of the subjects I will write about are new to me but may have been talked about by people in the past, and some may have even been discussed on the various primetime news and talk shows and/or local media outlets.

I don't know about you, but I get irked whenever I drive into town and see the large amount of wind-blown trash scattered along the fences and in the vacant lots adjacent to the various shopping centers. I have noticed that much of the tossed out trash is paper cups and food wrappers from fast-food establishments and the never-ending supply of plastic shopping bags. I don't know if it is certain people who can't figure out where the trash cans are or just don't give a damn about our environment or the picturesque beauty of our little oasis in the middle of the desert.

Either way, the one remedy to the problem inside Kingman city limits, in addition to being cited for littering, is stipulating in the business license process that the business will keep the surrounding area clean, that the right to operate the business ends when the surrounding area isn't tidy. That not only goes for small businesses, but also the large "box stores" and grocery outlets. Instead of allowing the trash to pile up over a period of time, why not have one of their employees take a quick trip around the area and pick up the unsightly trash. I don't think that it would take too much out of the employee's time schedule if they completed the task daily. Even the Mohave County government could get into the "keep the area clean" campaign by utilizing prisoners to help pick up trash along the streets. Historically, many towns and counties have used chain gangs to complete work. Let's just not allow the murderers to volunteer.

Speaking of trash; how about those old tires that always end up in vacant lots or in the desert. No matter where you drive, on road or off road, the used tires seem to dot the landscape. I wished I had a rubber recycling business; I would make a fortune just from the free resources available to me in the county outback. Here's a brilliant idea; I think both city and county officials should enact a new regulation, law or tax (whatever you want to call it) and impose a deposit on all tires purchased from stores and businesses. I bet that every old tire that had previously been illegally dumped would quickly disappear. Oh well, they might not disappear, but would definitely end up at a local recycling business just like the old rusted and discarded vehicles that have since disappeared since the price of scrap metal has gone up.

Now let's tackle our national leaders and I'm not going specifically after Republicans or Democrats. No matter how the economy is going - both up and also down the dumpers - it always seems Congressman and other political leaders such as the president, decide they have been working too hard and need a vacation. As a matter of fact, every time you turn around, some politician he heading off for a "well-deserved" vacation however, many of these politicians disguise vacations as fact-finding-visits to various cities, states and even other countries; costing the American public a lot of money.

Vacations? You've got to be kidding me that Congress has a five-week-summer recess when the economy is in such shambles. Maybe we American citizens who pay their salaries would be better served if they skipped their vacation and stayed in Washington, D.C., to work on the economy. I guess another thing most agree on is Congress really hasn't done anything right except insisting on their five-week vacation, and we all know they honestly don't take into consideration the thousands of unemployed Americans when they decide to enjoy some time off.

I know that many of our current political leaders are either now or will be hitting the open highways hopping to be re-elected in 2012. As part of their re-election strategy, they're stressing other government employees, such as Congress, should find ways to get people back to work. I love it when one politician points his or her finger at another politician.

A prime example of politicians thinking they have been working too hard and need a vacation is President Barack Obama, who decided that as part of his tour across America (we all know it is actually a campaign trip), he decided to take in a few rounds of golf on Martha's Vineyard in Massachusetts as part of a working vacation. It must be nice to take a vacation at the expense of American taxpayers when the economy is in such a mess and hundreds of thousands of people are out of work.

During his weekly radio show and internet address recently, President Obama said Washington lawmakers could learn a few things from the people in small towns in Illinois and Iowa. He said, "... there are some things they could get done right away, such as passing a road construction bill or extending a reduction in the payroll tax that pays for Social Security." All I can say to that is, stop borrowing money from the Social Security fund. No, I am not saying that the current regime is the only violator of this practice; both Republicans and Democrats in the past have siphoned funds off of the Social Security fund and never have paid it back. No wonder Social Security is in such a shambles and is rapidly heading toward extinction. You just can't continue to use revenue out of the Social Security fund for other things and hope the system will not break.

Here is something else I just can't figure out and/or comprehend. Most of our elected officials stress we should find a way to get Americans back to work and get them off the unemployment rolls. The unemployment rate in the United States was last reported at 9.1 percent in July 2011, but that only includes people actually on unemployment, those on unemployment who are actually out seeking a job and doesn't factor in those individuals whose benefits have already run out. But as we all know, some politicians "speak with forked tongues," and one moment they say they want to help get Americans back to work, but then they decide to send our tax revenues out of the country to "BUY FOREIGN" instead of "BUY AMERICAN."

A prime example of outsourcing and "dancing like a chicken on a hot griddle" is the purchasing of two very expensive buses for President Obama so he could tour around our country in "foreign" luxury. Our government spent $1.1 million each for two buses according to Secret Service spokesman Ed Donovan. In an attempt to justify the expenditure of funds, he said, "We've been overdue for having this asset in our protective fleet for some time," Donovan said. "We've been protecting presidential candidates and vice presidential candidates all the way back to the 1980s using buses during bus tours." Granted, the buses were purchased through Hemphill Brothers Coach Company, an American company in Whites Creek, TN, but they were actually manufactured in Canada. All I can say is there goes "BUY AMERICAN" out the preverbal White House window and possibly more American jobs and U.S. revenues lost to another foreign manufacturer.

Everyone knows there has been a giant wave of protests and opposition over Arizona's SB 1070 and it includes the United States government, which filed a lawsuit challenging the constitutionality of the law.

According to the U.S. Justice Department, 1070 targets undocumented immigrants, better known as illegal aliens, and is the basis for the legalized combat between the federal government and state over the nation's toughest immigration crackdown.

I don't know about you, but I believe it is virtually impossible to accurately estimate the illegal population in the U.S. Some statistics suggest there were 12 million illegal aliens in the U.S. during 2007 and that number allegedly dropped to 11 million in 2008. The U.S. Census Bureau estimates that there were 38 million immigrants (both legal and illegal) in 2007 and of that number, one-third were illegal immigrants. Of the aforementioned numbers, it is estimated by anti-immigration organizations, 7.7 million illegals were employed in the U.S. during 2008. The U.S. Department of Homeland Security says that 57 percent all illegal immigrants came from Mexico and 25 percent came from Central and South American countries.

Well, that's my take on a few local, regional and federal issues. I could have continued on, but I know the KDM staff hates it when I ramble on too long. So I'll keep the other subjects I want to discuss hidden away in my old gray matter between my ears until such time I decide to tackle them.

Congress needs to put its foot down on illegal immigration
Kingman Letters: Americans will do this work
Column: Mr. Hypocrite goes to Washington
Americans are fed up with rhetoric on immigration
Low turnout for protest at state Capitol in Phoenix