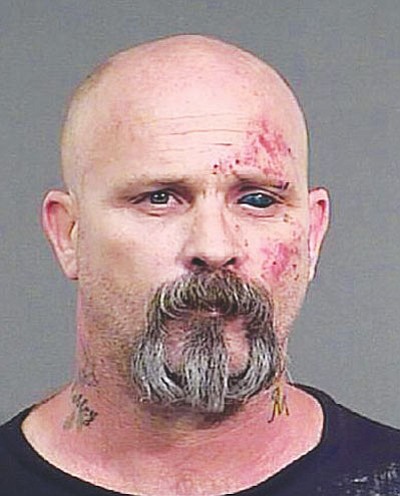 KINGMAN - A half-dozen armed officers stood guard during a court hearing for murder suspect Michael Rivera Tuesday where he was charged with four new felonies stemming from a fatal hit and run Nov. 21

Nickolaus Gerenscer, 23, was killed after he was struck by a Cadillac police said was driven by Rivera, the father of Gerenscer's girlfriend.

Rivera, 47, has been indicted on four additional charges stemming from the incident, including two counts of attempted first degree murder and two counts of aggravated assault involving Gerenscer's brother and father. They were with Gerenscer when he was run over in front of the home he shared with his girlfriend in the 2100 block of Valentine Avenue.

Rivera has already been indicted for first-degree murder in Gerenscer's death. According to witnesses, Rivera had been up and down the block at least five times before striking Gerenscer once with the car, then leaving and returning seconds later to hit him a second time.

Police have responded multiple times in recent months for disputes between the two families, with both sides lodging accusations against the other. Police are also aware of threats the families have traded since the hit and run. There were no outbursts during Tuesday's hearing.

Police believe a Dec. 18 home invasion may have been in retaliation for Gerenscer's death. One of Gerenscer's cousins, 18-year-old Jesus "Jesse" Matthew Camacho, faces assault and other charges after he and two underage suspects reportedly broke into the home of one of Rivera's daughters and assaulted her and a boyfriend.

A 15-year-old suspect was shot in the knee during the attack and remains hospitalized.