Column: Hey, Sarah, at least stand by your free speech 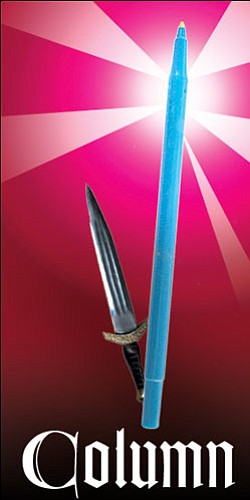 Last Saturday morning, 19 people were shot in a Tucson Safeway parking lot by a 22-year-old who stated on YouTube he "won't pay debt with a currency that's not backed by gold and silver." Fifteen minutes after the news broke, former Alaska Gov. Sarah Palin tweeted, "The price of gold today is at $1,368.90 an ounce."

None of us want to live in a society where hyperbole, exaggeration, satire, bad taste and horrible timing are subjective. Stupidity is legal. So are bad jokes. Ditto for calls for revolution. As are declarations using violent imagery. Pornography, too.

So Sarah Palin has a right to display images on her sites SarahPAC, Facebook and TakeDownthe20.com. On those sites she had riflescope icons over the districts of Democratic congresspersons who voted in favor of healthcare reform. She stated in bold red letters: "We've diagnosed the problem. Help us prescribe the solution."

In March, shortly after TakeDownthe20.com was launched, the window of Congresswoman Gabrielle Giffords' Tucson office was shot out with a pellet gun. Giffords said in an interview, "The rhetoric and firing people up ... we're on Sarah Palin's targeted list. But the thing is that the way that she has it depicted has the crosshairs of a gunsight over our district. And when people do that, they've got to realize there's consequences to that action."

There were reports of tea party protesters outside her office with signs like, "It's time to reload" and "One way or another, you're gone."

Why? Because people listened to Sarah Palin. They listened to her debunked baloney that reforming healthcare would kill your grandmother. According to Palin, Giffords was trying to kill everyone's favorite elderly relative. Therefore, there was a target on her.

There is no evidence any of those people who listened to Palin shot the member of Congress in the head with a semi-auto Glock. Besides being steeped in revolution, a cockeyed view of The Constitution and anti-government rhetoric, the shooter has no connection to Palin.

However, minutes after the former governor tweeted about gold, her website was scrubbed of the now infamous crosshairs graphic. It was gone. Then there was a note on her Facebook page: "On behalf of Todd and my family, we all pray for the victims and their families, and for peace and justice."

So in a moment of national peril - when a political "enemy" who was on a hit list had been "taken down" - the first thing Palin does is act in her own interests?

By law, Palin has the right to hurl verbal grenades. But free speech doesn't mean you're not accountable for the things you say. It means the government can't pass laws to make saying them a crime. It doesn't mean you can beat the drum of rebellion, sell a couple books, delete a graphic, embrace the Bill of Rights and you are magically not a selfish weasel.

Here's the thing: Palin had an opportunity to have a "bullhorn moment." She had the opportunity to rise to the occasion and prove all her critics wrong. She could have proven she truly is a leader. That she's not just a capitalizing catty mean girl who can't tell the difference between an opponent and an enemy. That she is worthy of all this presidential buzz and not just skating by on some mushy conservative platitudes and good looks. She could have come out strong and expressed regret for demonizing a member of Congress who was shot in the head with a 9mm. But instead ... she cowered. Pitiful.

Palin wants her followers to "stand up?"