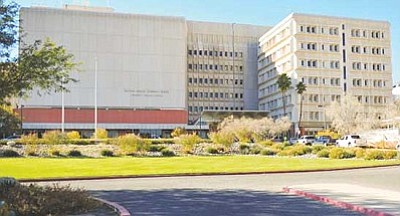 AP<br /><br /><!-- 1upcrlf2 -->The University Medical Center in Tucson has one of the few Level I trauma centers in the state of Arizona. Such Level I centers are usually located only in heavily-populated areas due to the expense of running them, but they are also the only places capable of performing complex, specialized surgeries, like the ones that saved U.S. Rep. Gabrielle Giffords’ life after she was shot in the head earlier this month.<br /><br /><!-- 1upcrlf2 -->

KINGMAN - Regular readers of the Miner may notice how frequently victims of car accidents and other serious injuries must be flown out of the state for medical attention, rather than taken to a local hospital.

That's because, of the two local hospitals, only one has a trauma center, and that trauma center is rated Level IV - the lowest level recognized by the state of Arizona, and well below the clinical capabilities of a Level I or even a Level II facility like Sunrise Medical Center in Las Vegas.

But while neither Kingman Regional Medical Center nor Hualapai Mountain Medical Center are likely to establish Level I trauma centers anytime soon - or even later, for that matter - both hospitals are aiming to develop Level III centers within the next several years, a move that would not only cut down on the number of expensive airlifts to Las Vegas, but would also help bolster Kingman's profile as one of Arizona's top rural medical hubs.

According to Dr. Frank Paul, director of medical education in HMMC's emergency department, a trauma center is a specific type of facility dedicated to the treatment of injuries, though the types of injuries each center can handle and the consistency with which they can handle them varies widely between levels, with specific requirements laid out for each.

"Level I requires most of the special surgery, particularly neurosurgery, as well as trauma surgery and thoracic surgery available 24 hours a day, seven days a week, and that's expensive and hard to come by because you can't get just one guy to do it all," Paul said. "It becomes Level II if you have the people, but they're not available all the time, and certain people still have to be available all the time."

He said personnel and their related expenses are easily the biggest obstacles to establishing the top two levels of trauma centers, especially considering some specialized surgeons can command salaries in the seven-figure range.

"Typically, the call service fee per night is about $1,200 per physician, per night, per service, and you usually have eight to 12 services on call each night. That's the kind of outlay you need just to have a Level I trauma center on a daily basis," Paul said.

One of the main reasons Kingman won't be getting such a center anytime soon, he said, is due to the fact that, even if one could be established here - something Paul estimated would cost at least $10 million to establish and another $5 million each year to maintain - it would not be able to earn enough money to stay open since there are simply nowhere near enough local trauma cases to pay for the services rendered.

"You have to have several hundred cases a year to even maintain qualification and certification, and you need a population between three quarters of a million and a million in the service area just to maintain that level of trauma," he said.

Another problem with establishing cash flow is the fact that many patients who are treated in trauma centers cannot pay their surgery bills. While that may not be a problem for centers in large metro areas that can absorb the costs through their sheer volume of patients, smaller areas such as Kingman would have to ensure that every customer pays their bills in full - a virtual impossibility in a region where many families are simply struggling to make ends meet.

"If everyone who comes to your hospital is insured and has lots of money, then you can do that," Paul said.

"But if you're uninsured and unemployed, you're still going to get hurt just like anybody else. Almost 50 percent of people who go to the emergency department don't pay their bill anyway."

But while Level I and II trauma centers may remain out of reach for the time being, both HMMC and KRMC are laying the groundwork to eventually become Level III trauma centers, which can handle general surgery and mild-to-moderate orthopedic surgery 24 hours a day, as well as radiology, anesthesia and emergency medicine. Of the two hospitals, KRMC is currently closer to its goal, having already established a Level IV center in 2009 and taking further steps over the past year.

According to Sue Kern, a registered nurse and KRMC's trauma coordinator, the hospital is already nearly a Level III center in everything but name, having established the necessary staff and equipment. The one remaining hurdle, she said, will be to submit the formal 45-page application to the American College of Surgeons, the body in charge of officially verifying when a hospital has met the criteria for a Level I, II or III trauma center.

"We have all the equipment and people to become a Level III, and we're now putting the processes in place," Kern said. "We have to make sure we have a performance improvement process - when we look at the patient and look at his care, we have to make sure we did a good job, and if we didn't, we need to make sure it doesn't happen again by addressing if it's a process issue or a provider issue."

Kern said KRMC has developed a pager system over the past year that is capable of informing each member of its trauma team whenever a trauma patient is en route to the hospital. She said the trauma team currently includes at least two resident physicians, the emergency room doctor, two general surgeons, a cardiovascular surgeon, at least three nurses, a respiratory therapist, a lab technician and a radiologist.

She added that the three new surgeons have already helped cut down the number of patients KRMC has had to ship to Las Vegas, treating injuries as severe as gunshot wounds and multi-system traumas over the past year.

"We shipped out 92 patients from the ED in 2010, and '11 will be the first year we start to benchmark to see if we keep any more, but it's already much lower than in years past."

Kern said she hopes to submit KRMC's application for a Level III center to the ACS by early summer, with a decision likely by the end of the year. If the ACS is satisfied with the hospital and its proposals, then it will receive its Level III certification.

But Kern said the ACS can be very particular about establishing the proper procedures, and failing to satisfy all their criteria would require the hospital to resubmit its application, at a cost of somewhere between $10,000 and $14,000 a pop.

"We have to formally have a job description for a medical director, and I've got a draft of that. After you submit the application, they schedule a walkthrough and come over and assess you, look at all your patient records, make sure you have the equipment and you do what you say you're doing."

HMMC spokesman Drew Markell said his hospital has also recently begun putting some of its processes together, but Paul said he believes it may take a little longer before HMMC has all the staff it needs, namely because the hospital's parent company, MedCath, has put it up for sale, which has a tendency to slow down the pace of recruitment until a buyer is found.

"When it is purchased, it will be redirected and refocused and change timetables for how long it takes things to get done significantly," Paul said. "The companies that have been spoken to, some of their top focuses have been recruitment."

If one of those companies were to purchase the hospital, Paul said it could take somewhere between one and two years for HMMC to get a Level III trauma center in place. Otherwise, he said, the hospital might be looking at an extra year or two to draw the required talent to the area.

"It requires recruiting, and you'd have to have the physicians on call and available 24 hours a day," he said. "I think it would take two to three years, to tell you the truth."