Hinckley's latest a must-read for fans of Route 66 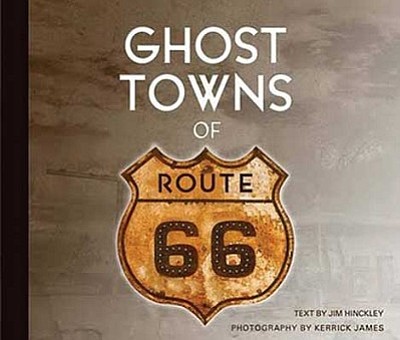 Jim Hinckley lives in Kingman and has written three books in collaboration with Kerrick James, all photographic essays about the West. Their previous books were "Ghost Towns of the Southwest," "Route 66 Backroads," and "Backroads of Arizona."

Hinckley and James know the territory, and in "Ghost Towns of Route 66," they have captured what these towns look like today. There are some old photographs taken by others that were obtained from private collections and historical references to demonstrate life as it was 100 years ago.

These ghost towns are a throwback to a bygone era.

Many towns died due to the building of modern highways that bypassed them, others were deserted because the means to earn a living had been exhausted, and many were vacated because the people just moved on to capture other dreams.

Hinckley and James explore the ghost towns along the entire path of Route 66. Other ghost towns abound in various areas around the United States for many of the same reasons, but they do not have the allure and glamour of Route 66.

Worldwide, tourists come to travel the "Mother Road" using various methods of transportation. However, motorcyclists have adopted Route 66 as their special place to travel. Route 66 meanders near the freeways that replaced it. Travelers find a more peaceful journey taking them to the past on 66, but sometimes they have to travel back to the interstate because parts of Route 66 have been totally dismantled.

Yet some of the places of yesteryear are still functional and provide nostalgic stopping points along the way where the tourist can once again experience how it felt to those who traveled before them. Hinckley points out in his narrative how to access some of the more interesting towns that are located off the beaten path of Route 66 and experienced some relocation before the modern freeway.

Route 66 starts in Chicago and meanders west to Los Angeles. Hinckley describes this travelogue with many references to a 1946 book written by Jack Rittenhouse, "A Guide Book to Highway 66" published by the University of New Mexico Press.

Use of that book does not detract from the main message of this book, which is a guide to the past.

"Ghost Towns of Route 66" can be visited easily and with all different means of transportation. Riding in a 1929 "Tin Lizzie" built by Henry Ford would be a great way to explore this great country of ours. Also, the mileage this car got back then was about 50 miles-per-gallon!

This book is recommended to all who are affectionate about old byways and want to get their nostalgia fix on Route 66. This is a three-star book.

Clark Isaacs is an accomplished book critic who is published in local newspapers and national book review lists. Visit Clark Isaacs at http://clarkisaacs.ning.com.