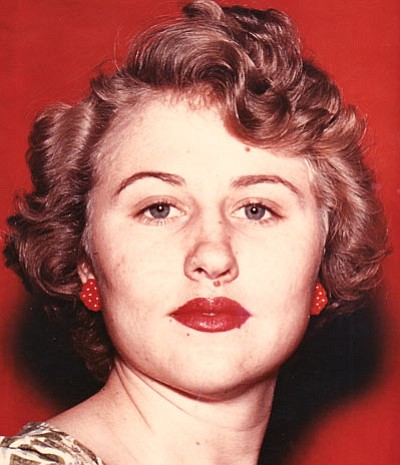 Edna Mae Turner, 74, of Kingman lost her brave battle with declining health on Monday, June 27, 2011, surrounded by her family.

Edna was born to John Ray Hanson and Oma Lee Golden Hanson on Jan. 25, 1937, in Gillett, Ark. She was a Harvey Girl when she met her future husband, Lawrence Criswell Turner. Edna married Lawrence after they borrowed $2 from Lawrence's mom to pay Lawrence's dad, the Justice of the Peace of Gila County, to perform the ceremony on May 19, 1952, in Pleasant Valley (Young), Ariz. They were married 59 years. Edna was a waitress for many years at the Kings Arms Restaurant. She later obtained her GED and went to work at First Navajo National, later Great Western Bank, where she was the operations officer. Edna later retired and traveled with Lawrence while he worked road construction all over the southwest. They kept their home base in Kingman since 1962.

There will be a private cremation at Sutton Memorial Funeral Home. Her family will release her ashes in the forest where she can be free with the trees, birds, elk and deer.