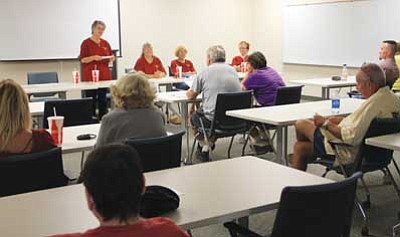 KINGMAN - Much of the hubbub about the county's attempt to change its animal ordinances has died down since the Board set the issue on the November 2012 ballot in April. However, one group of animal lovers hasn't given up the fight to change the proposed and current laws.

Guardian Angels of Pets met Saturday to collect information from people about their experiences with Mohave County Animal Control and to gather ideas for a better, more pet-owner friendly set of ordinances.

Around 17 people attended and many had stories of Animal Control officers coming on to their properties without permission and handing out citations.

Carolyn Pruitt, a member of GAP, said she had just moved into her home when she received a visit from an Animal Control officer. Pruitt said the officer parked her van behind a shed on her property, opened a gate that had been wired shut and gained access to her back yard. The only reason Pruitt knew the officer was there was because she followed her dogs from the garage, where she was working, to the back yard to see what they were barking about. When she asked the officer what she was doing in her back yard, the officer told Pruitt that she had found two of her dogs in the street two blocks away and had come over to return them.

"How did she know who they belonged to and where to return them?" Pruitt said.

Guy Allen said he was charged with 16 criminal misdemeanor offenses when a neighbor walking with her dog allowed the animal to wander onto his property and one of his dogs attacked it. He paid for the vet bills and pleaded guilty to a lesser offense but was still slapped with a hefty fine and several hours of community service.

Allen said there were at least 50 other people in the Dolan Springs area who had similar offenses filed against them.

Both Pruitt and Betsy Senn, another member of GAP, said they have seen an animal control van make repeated trips up and down their streets and neighbors' streets to try and get neighborhood dogs to come to the edge of the property so they could cite their owners for having too many dogs or for dogs barking.

Senn and the other members of GAP encouraged those who attended the meeting to fill out a form and write down their experiences with animal control. The group plans to take those stories to its next meeting with Mohave County Supervisor Gary Watson. The group has met with Watson more than once and he has been helpful in arranging meeting with members of the Mohave County Sheriff's Office, which runs animal control and the Mohave County Attorneys Office, who were able to explain some of the current ordinances and state laws.

Pruitt and Senn also stressed that the group is not interested in becoming a non-profit organization and is not seeking donations of any kind. They just want to want to help create a more pet-owner friendly set of county ordinances and perhaps help some seniors take care of their pets and locate lost pets.

Pruitt said they were told several times that the system is supposed to be complaint driven and that officers are supposed to try and make contact by knocking on the front door of the home first.

Officers told them that all laws must be enforced, they can't pick and choose, Senn said, but she pointed to a number of laws on the books that are no longer enforced, such as allowing a donkey to sleep in your bathtub.

Officers don't have to cite for every offense they find, Pruitt said. They can give warnings.

Pruitt and Senn also said they had heard that at least one county department, they didn't know which one, was already following the new animal ordinances. Those ordinances were not supposed to be in use. GAP and other animal rescue organizations collected more than 5,450 signatures in November and forced the revised ordinances to be put to a vote of the people. According to state law, those revised ordinances cannot be put into effect until after the election and only if the voters approve them.

"Our dog laws, the animal ordinance and animal control enforcement policies need to be changed so that a responsible residential pet owner, who is only guilty of loving dogs, should not be made to feel like a criminal nor be subject to intimidation and harassment from animal control, nor be sickened by the stress of court procedures, or pay outrageous fines, or face jail time, or fear for the death of their beloved pets," Senn said.

Allen suggested that there be different ordinances for ranchers and their animals than for pet owners. Working dogs on ranches required different care than pets, he said.

Another person suggested creating a spay and neuter program that would help low-income people pay to have their pets neutered. Another person pointed out that the Western Arizona Humane Society, which is in charge of the Kingman animal shelter, has such a program and charges people based on their income level.

Another person suggested getting rid of the four-dog limit the county currently puts on county residents.

Senn agreed. As long as the animals aren't being abused or mistreated, what difference does it make how many animals a person has, she said. She pointed out that Lake Havasu City does not have a limit on the number of animals a person can have.

The group agreed to meet in the future, but broke up without setting a date. For more information on GAP, visit gapforce-guardianangelsofpets.tripod.com or call 9928) 692-5382.