All-Star Game pilgrimage a must 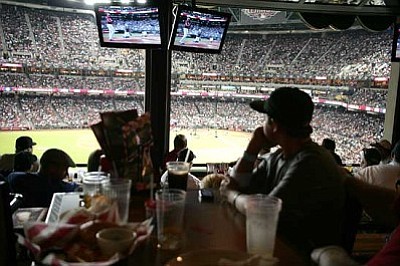 It was just past 10 p.m. Saturday when I steered my 2001 Kia toward Interstate 40. Destination: Phoenix and the All-Star Game festivities.

I was answering the call of Abner Doubleday, the man who invented baseball. Here are just some of the sights and sounds from the All-Star festivities in Phoenix this past week.

When it was first announced the All-Star Game was coming to Phoenix, one of the things I was looking forward to was checking out the All-Star Fanfest just as I checked out the NFL Experience when Super Bowl XLII was played in Glendale. Now for those who don't know, Fanfest is a baseball-themed park of sorts where you can take batting practice, run the bases, take clinics and view demonstrations. However, I have to admit I was little disappointed in it. I thought the NFL Experience was bigger and had more stuff to do. But then again, my disappointment may come from the fact I'm 30 and not 13. Taking batting practice and running the bases just doesn't appeal to me.

But on the other hand, they did have a scaled down version of the Baseball Hall of Fame, a silent auction and a tribute to the Negro Leagues, which was appealing to me, along with a baseball card show. So in the end, the $25, (thanks to my student ID) was still worth it.

However, I do have a suggestion to MLB to improve it. All around I saw concession stands that look typical for any event held in the Phoenix Convention Center. But since every ballpark has different delicacies that are unique to that park, a food court that serves a taste of every ballpark so fans can get Dodger Dogs, Fenway Franks, Philly cheese steaks and so on would be a great addition.

Derby day started just after 2 p.m. when I arrived at the Metro light rail station, certainly the best deal in town. Park in Tempe, pay $3.50 and ride the rail instead of spending $20 for parking downtown. I don't think Phoenix could've pulled this off without having the light rail, probably one of the best things that city has ever done.

As I approached the ballpark almost two and a half hours before the derby, I sensed more good news for the hosts - the heat that everyone feared would do Phoenix in wasn't that bad. It wasn't that let's stick our face in a oven blast of dry heat. It was more of hot summer day that was no different then Chicago or St. Louis, except with less humidity.

Back on Opening Day, tickets for the derby on Stubhub were going for as much as $150, but Monday they were $30. All along my intention was to never go to the derby, it was watch the derby from Chase Field's best kept secret, T.G.I. Friday's Front Row.

I arrived there just before 3 p.m. and was greeted by a $10 cover, which was surprising, because in May when I spoke to someone I was told there would not be a cover. But still, $10 to watch the derby wasn't that bad and, besides, for the $35 in food that my buddy and I ate, we probably ate more food than the people in the stadium. As the derby neared, the place started filling up, but it was not as packed as I had thought it would be. I was able to lay claim to a table just a few feet from a table where people paid $400, yet we had the same view of the field.

The All-Star Game is certainly a convention of baseball fans, and in the bar leading up to the derby jerseys, shirts and caps represented over half of the 30 teams. The collection reminded me of the lyrics of Toby Keith's

song "I love this bar." We had Yankee fans, Red Sox fans, and one lone Nationals fan. We even had an Indians fan sporting a Roger Dorn jersey. Yes, that Roger Dorn from the movie "Major League."

The whole point of this trip was not to go the All-Star Game but to experience the spectacle, even if that meant getting a table at Friday's Front Row again for $10. But when I noticed on Sunday that tickets for the game itself were going for $75 on StubHub, then going to the game became a real possibility. By Monday, the tickets had dropped to $65 and after the Home Run Derby, tickets hovered around $70.

Now was the time to buy.

My own theory about prices for All-Star tickets dropping was that people changed their plans as game time neared. My buddy had a better take. He said he thought the prices dropped because the list of players participating looked more like players to be named later in bad trades.

But with tickets at $70 in hand, we made our way towards Chase Field where street preachers informed my friend, a Cubs fan, that the reason the Cubs haven't won a World Series in more than 100 years is because Chicago's gay pride parade goes by Wrigley Field. It's not the Billy Goat curse, after all.

Inside the stadium the list of jerseys and teams represented continued. There was the Montreal Expos jersey worn by the ticket scalper outside the stadium, and a Houston Colt 45's jersey worn by a kid a few rows below me. Now being a Dodger fan, I had to set aside my animosity towards division rivals and join Giants, D-backs and Padres fans along with Cubs and Cardinals fans against one common enemy, the American League.

The good news for us National League fans is the NL won, 5-1, giving the Phillies home field advantage in the World Series.

But the real winners were the city of Phoenix and the state of Arizona. Phoenix did a remarkable job in hosting the event and getting fans in and out of downtown without problems.

It took 13 years to get the game here, and with nine new or renovated stadiums opened or soon to be opened plus other teams that haven't hosted the game for more than 30 years, it's going to be long time before the Diamondbacks host another. But, hopefully, the next time they do MLB will make some changes to the game.

Yes, the game was fun and worth every penny, but when the Home Run Derby the night before lasts longer than the game itself, things need to change. For starters, how about moving the game from Tuesday to Wednesday? This way you can allow the pitchers from Sunday to pitch, plus everyone gets four days of rest.

After all, there was only a handful of games played Thursday and most teams start the second half today.

Or maybe, have the Home Run Derby spread across two-days with the first two rounds on Monday and the finals on Tuesday.

But whatever changes are made to the game, the next time the All-Star Game rolls through your neighborhood, I recommend you go.

After all, it's a pilgrimage every baseball fan should make.