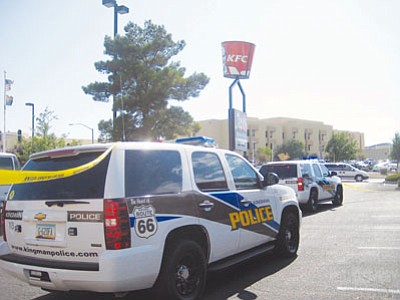 ERIN TAYLOR/Miner<br /><br /><!-- 1upcrlf2 -->The Kentucky Fried Chicken fast food restaurant on Stockton Hill Road was closed Monday afternoon as police officers interviewed witnesses of an armed robbery. The witnesses reportedly positively identified a 22-year-old man arrested within an hour of the incident as the man responsible for the robbery.

KINGMAN - A 22-year-old suspect was arrested within an hour of an armed robbery at the Kentucky Fried Chicken Monday afternoon.

Curtis Ryan Standlee was found hiding behind an apartment complex in the 3200 block of Harrison Street just before 5 p.m. He was arrested after a brief chase on foot.

Kingman Police Capt. Rusty Cooper said the man had to be treated for symptoms of heat exhaustion before being booked into the Mohave County Jail.

Standlee reportedly matched the description of a man who entered the KFC just an hour earlier and brandished a handgun while demanding money from the cash register. Employees turned over an undisclosed amount of cash, which was reportedly found on Standlee when he was taken into custody.

Cooper said officers were very methodical in their search, using surveillance footage from neighboring businesses to confirm the suspect's description as given by witnesses. The Department of Public Safety Air Ranger tracked several people wearing similar clothing to that worn by the robber, which led officers to Centennial Park and the surrounding area, which included the apartment complex where Standlee was found by an officer and held at gunpoint until backup responded.

No one was injured in the robbery and subsequent arrest. Standlee is currently being held on a single count of armed robbery, along with a parole violation warrant issued by the Arizona Department of Corrections.