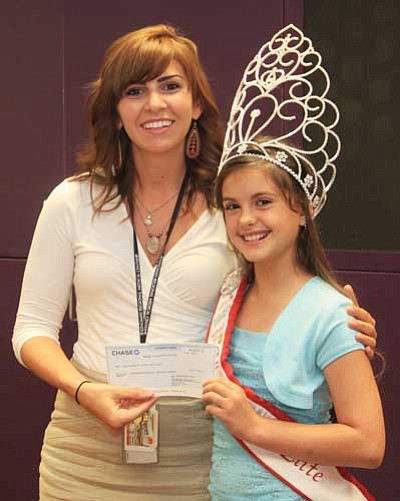 KINGMAN - Danielle Kirby, a 10-year-old Kingman girl, competed in more than 20 beauty pageants in the last four years, but her favorite event wasn't a pageant. It was a modeling event called Runway for a Cause.

The All American Elite Society - a Nevada organization focused on combining pageantry with community service-based youth development - put the event on in late April at a mall in Primm, Nev.

Danielle's mother, Tedi Kirby, said 34 contestants modeled seven different outfits, including pajamas, casual wear and red-carpet wear, on a T-shaped runway. Each model picked a specific charity they wanted to donate their winnings to. Danielle was the high-point model, meaning she beat out the other contestants and received 75 percent of the pot - $200 - to donate to her charity. The other contestants split the remaining 25 percent of the pot, so that they too could donate to the charity they picked, Tedi said.

Danielle's father, Dan Kirby, is a Type 2 diabetic and her cousin is a Type 1. She sees the struggle with medication, daily injections, keeping a balanced diet and maintaining an exercise regiment diabetics go through first-hand and cares very much about it, Tedi said.

With that in mind, Danielle decided she wanted to donate the money to some type of diabetes-based organization, and since there's no official charity in Kingman, her $200 award went to Kingman Regional Medical Center's diabetes self-management education Tuesday night.

Rachel Head, the program's director, said the money will be used to purchase visual aids that help diabetics learn what is going on in their bodies when they have high blood sugar or they eat foods with a lot of saturated fats.

"Diabetes is the silent killer," Head said. "Any visual we can provide motivates people to go to their doctor's appointments, check their blood sugar daily and make healthy food choices."

Danielle has a good heart, Head said. She is focused on her community despite being so young.

Donations to Head's program are infrequent and this one came as a surprise.

Pageant success is nothing new to Danielle.

She placed in her first few competitions, but since then she has won nearly every single one she competed in, including being crowned Miss Tri-State America. That competition had a community service stipulation, and after Danielle committed 110 hours of her life to her community, she was awarded President Barack Obama's Gold Volunteer Service Award, which came with letter and certificate of appreciation signed by the president.

Although Danielle has competed in five glitz pageants where contestants often wear thick layers of makeup, fake hair and eyelashes and even fake teeth called "flippers," Tedi didn't allow her to take it that far. She didn't wear fake anything and her makeup was very light, Tedi said. Even so, Danielle still won divisional queen at one of them, she added.

Tedi said the majority of the competitions Danielle enters are natural events, meaning the children are judged on who they really are and what they really look like.

This mentality spreads to Danielle's pageant preparation as well. Other than practicing her singing, Danielle doesn't prepare for events until the last few days before shows, she said. If she doesn't have fun, it's not worth it, Tedi said.

Keeping it fun and the pressure to a minimum allows Danielle to be herself and succeed, Tedi said.

"I get so excited when she's on stage," Tedi said. "That's your beautiful, smart and talented kid up there. I get choked up every time I see her up there. It never gets old watching her."

Danielle said she liked Runway for a Cause because there was minimal pressure, and she felt like nobody was there. It allowed her to be more relaxed than normal.

She sees pageants in her future, especially since she can win college scholarships, which would help her follow her dream of one day becoming a veterinarian. But for now, she enjoys competing, going to school and loving her pet guinea pig, Carol.

Sometimes Danielle gets the jitters at big pageants, but she shakes them off and tells herself she will do well.

"I just rock it out," Danielle said.