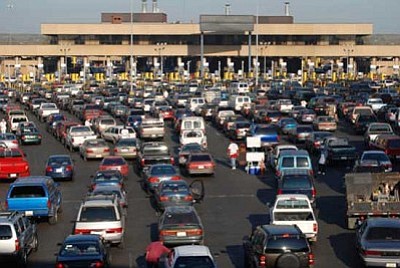 Furthering the discussion began by Mr. Emile Manara May 24, 2011, "some truths about illegals."

For your outstanding diatribe to be more impressive, you have forgotten to mention, Nicaragua, Dominican Republic, Haiti, Cuba, Columbia and Venezuela. All have contributed to illegal status. Then, of course, we have a few from the Orient and the Mideast, but those majority are issued visitor permits, student permits, or whatever permits necessary to enter the United States as legal "aliens," which must take place because of the billions of dollars invested in American investment conveyances (example: Treasury Bills).

Apparently your exposure to much of the "illegal" problem has been rather limited, which is understandable because you were kept occupied apprehending the people from your "Opinions" page contribution, most Central America countries. Mexico was your primary target. These are people with no liquid investment potentials, just people who want work to support families here or are in dire need in their home country. Going to bed hungry and awakening mornings still hungry is most disagreeable, wouldn't you agree?

To insinuate that these people come to the United States just for welfare is not true. (As will be attested to in the following.)

First, the benefits they wish to obtain, they wish to work for! Given the opportunity, their daily work output is equal to the majority of American workers in any field of endeavor.

To say that none wish to become citizens of this country is once again in error. Citizenship, or green card status, takes years to obtain here in America. The "undocumented" realize they are not welcomed here but only serve a purpose some employers desire. To consider permanent residency would be just a dream. You wish to discuss money sent overseas, taken out of our economy? Look to many nations, among which are Africa and Israel to name just two. Not all financial support is for purchasing future American-made products through a credit-based system. You seem to forget that "undocumented" workers pay tax on everything they buy. Some, through fictitious security numbers, even pay income tax.

Why do some employers hire these workers? Simply because they will do the required job better, timely and dependably. You state they take jobs away from American workers! That opinion indicates to me you have been a government employee with no experience in select businesses requiring this level of experienced employee. Work with your hands and back for a while; I guarantee with normal intelligence your outlook on Central American workers will undergo a drastic change.

They do the job, Mr. Manara, but the attitude put forth in your commentary complicates whatever chance they have to better themselves.

Now here is where your factual continuity seems to break down, considering your statement that illegal transgressors enter the United States to partake of a myriad of services furnished by our taxpayers: You state that "undocumented workers" are not "critical" to the U.S. economy, barely make up 5 percent of the workforce, yet send back to their home country over $20 billion yearly. And that reminds me of the fish that got away! Every time the story is told the fish gains in size! (What's happened to welfare recipients?)

Your commentary then casts disparaging "innuendos" toward a political party, attempting to influence voters to the voting booth. How many of these workers do you really believe cast votes?

You are now retired from the Drug Enforcement Agency, which did not come into existence until about 1973 (special agency developed by the Department of Justice to investigate drug importation). Prior to cross-border drug smuggling, there were very few problems with Central America citizens entering the United States. Those who did quietly went to work, sent money home, spent money here for food, rent, car payments, utilities, insurance, household furniture, etc. You are aware that undocumented Central Americans, now into second and third generations, are living here without proper document papers. You should be aware at your age that many fought for America in the second world war and wars beyond, have lived here, contributed to society, raised families, educated children, done everything within the law, and done this without a piece of paper stating "American Citizen." There are undocumented workers here right now who are walking the same path - good people. Is it too much to ask, Mr. Manara, to give them a chance?

You earned your livelihood when drugs changed border crossings into a very lucrative business avenue. Why did this happen? Look to the Roaring 20s and Prohibition. The demand exceeded the illegal supply! A presidential family patriarch (Kennedy) made a fortune smuggling Scotch whiskey into America. Whenever there is a demand, someone will furnish it. This is the fundamental of the capitalistic system.

Further, Mr. Manara, I wish to point out to you that we are an "immigrant nation," barely 600 years old when compared to other nations! We as a nation now are undergoing "growing pains," just as all nations have at one time. Our ancestors, relatives by chance, arrived here and subjected the native people to unspeakable brutality when taking their homeland. Mr. Manara, this treatment applied also to Mexican (Central American) native people, for this was their homeland too. By now, at this time of our development, we should be experienced, educated to the point of assessing our position in an advancing society, and capable enough to live in peace with our neighbors. Attitudes must change and true leadership must materialize, which hasn't from our existing illustrious, Washington, D.C., puzzle palace, leaving the citizens, "wondering what the hell are they going to do next," in regards to the executive office and national legislature!